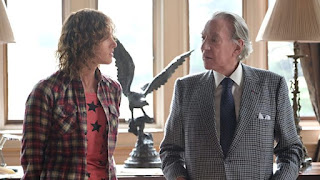 Trust, the star-studded new drama from executive producers Danny Boyle, Simon Beaufoy and Christian Colson based on the notorious true-life kidnapping of the heir to billionaire John Paul Getty, comes to BBC Two this autumn...

Originally thought to be heading for the UK in the spring thanks to Sky Atlantic, (read Susan Omand's comparison at the time between Trust and the hastily recast cinematic version of the same real life story All The Money In The World here) Trust examines the corrosive power of money and explores the complexities at the heart of every family, rich or poor.

Trust opens in 1973 with the kidnapping of John Paul Getty III (Dickinson), heir to the Getty fortune, in Rome. His captors bank on a multi-million dollar ransom, but back in England Paul’s wealthy grandfather (Sutherland) refuses to pay up. With Paul’s father (Michael Esper) lost in a drug-induced daze, it is left to Paul’s mother - the penniless Gail Getty (Swank) - to negotiate with both the increasingly desperate kidnappers and her stubborn former father-in-law to save her son.


Patrick Holland, Controller of BBC Two, said “I am tremendously excited that Trust is coming to BBC Two. The series has the unique scale, singular vision and extraordinary swagger that only Danny Boyle, Simon Beaufoy and Christian Colson can bring.”

Sue Deeks, Head of BBC Programme Acquisition, added “Trust is bold storytelling, made with verve, style and ambition. The Getty family have captured the public’s imagination like few others, and there is no better team to reimagine their story for television than the award-winning trio of Danny Boyle, Simon Beaufoy and Christian Colson. We’re very excited to bring this compelling new series to BBC Two."

Trust will air on BBC Two from the autumn.