Book - I Only Killed Him Once 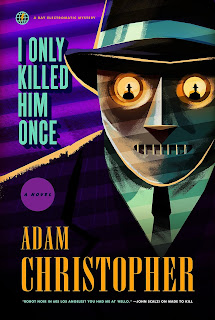 "Another Hollywood night, another job for electric-detective-turned-robotic-hitman Raymond Electromatic" as Titan Books announce the publication next week of the final book of Adam Christopher’s LA Trilogy, I Only Killed Him Once...

The target is a tall man in a black hat, and while Ray completes his mission successfully, he makes a startling discovery―one he soon forgets when his 24-hour memory tape loops to the end and is replaced with a fresh reel…


Time is running out for Ray and Ada, and if Ray and Ada want to survive their enemies, they need to do exactly what the man in the black hat says.

A man that Raymond Electromatic has already killed.

I Only Killed Him Once is the concluding title in Adam Christopher’s LA Trilogy series that is a mixture of the styles of Raymond Chandler and Philip K Dick, injecting hardboiled crime with an electric dose of science fiction. I Only Killed Him Once can be enjoyed as a standalone read, but as a celebrated voice in the UK’s SF scene the whole series is deemed a must read for fans of the genre.

Adam Christopher is a novelist, comic writer, and award-winning editor. Adam is the author of The Burning Dark and the LA Trilogy, as well as co-writer of The Shield for Dark Circle Comics. His debut novel, Empire State, was SciFiNow’s Book of the Year and a Financial Times Book of the Year for 2012. Born in New Zealand, he has lived in Great Britain since 2006.

I Only Killed Him Once is published by Titan Books on 10th July.