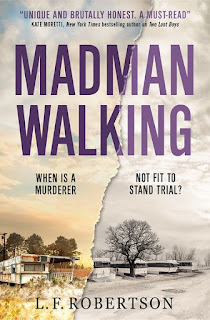 Steve Taylor-Bryant steps into a new type of legal thriller as he read L.F. Robertson's Madman Walking, thanks to Titan Books...

Howard Henley is not a killer. That seems obvious to lawyer Janet Moodie when she’s called in to work his appeal. Her new client was convicted of arranging the shooting of a drug dealer, but the man who pulled the trigger has always said Henley had nothing to do with it. So why is Henley the one on death row?

Janet’s new case takes her from the desperate world of prison gangs, where men are murdered as an initiation rite, to the courtroom, where a mental illness might mean the difference between life and death. Can she convince a judge of her client’s innocence before it’s too late?

I hadn’t read anything by L.F. Robertson before. Surprising, considering the Sherlock Holmes short stories and forensic crime solving that her previous books contain, but when my favourite publisher Titan Books sends me a novel described as ‘better than John Grisham’ you sit up and take notice. Whatever your opinion on John Grisham the man, his books have for decades set the bar for legal thrillers. Can Robertson, a practising attorney who specialises in Death Row cases clear that bar? Yes. Yes, she can, but not in the same way that a Grisham book might.

Madman Walking is a superb read, a well-constructed narrative that describes in detail the ins and outs of a legal argument, goes into details about the amount of work that a legal counsel will go through before they even set foot in a courtroom, and it gives great insight into how taking on certain cases start to affect the lives of those involved. Whilst a Grisham novel will add a layer of Hollywood gloss to the story structure, maybe make a lawyer a bit more screen sexy, Robertson has made her protagonists as normal as can be. Janet Moodie makes cider with her neighbour and goes to exercise classes and walks her dog and reads a book, which makes the characters especially Moodie a lot more relatable. Does the description of meeting her neighbour for a coffee slow the narrative more than ramping up action like Grisham may do? Yes, of course, but that is not necessarily a bad thing; I went for a coffee with my mother before sitting to write this review. My point, I guess, is that normal people do normal things outside of their day job and that is not often covered in a novel, which made this book remarkably refreshing. It is the end of the book though that got me, that made me weep a little. There is no big pay off like a normal legal thriller would have, the good guy doesn’t always win. The last few chapters of Madman Walking were the only time I felt I was reading a true-life story not a work of fiction because you couldn’t end a work of pure fiction like Robertson ends Madman Walking, a publisher wouldn’t release it. It doesn’t end as a story should, because these events happened.

When I go back in my mind to my reading experience on Madman Walking I can see that, throughout the novel, Robertson has plainly shown me that this is real life. The in-depth look at the treatment of people with mental health issues is at the forefront of public debate right now and I can see why, with the way Robertson has shown the treatment they receive throughout the legal process, from arrest, through trial, to prison and, when you get to the end of Madman Walking, you should be quite angry, quite upset, and you should be questioning how a supposed civilised society treats their citizens. By contrast, when you finish a Grisham novel, all you are wondering is who will star in the film. I think I prefer to be educated and want to question the disparity in treatment of certain individuals more than I want to guess a cast.

That’s the big difference between this wonderful novel from Robertson and any other book within the legal fiction genre, Robertson draws me into the story with its normalcy and then challenges my morals and ethics with the narrative, other authors make me wonder if Tom Cruise will be in the film. Robertson has made me question treatment, question whether we give enough support to those individuals that society has spat out. She has made me want to learn more and question myself, what would I do in a certain position? How would I want to be treated? At the same time Robertson has also created a wonderful story around the true-life facts and has entertained me with a book in a genre where I thought I had seen it all already.

L.F. Robertson demands to be read and Madman Walking is a fantastic jumping on point. Much better than Grisham, more emotional than other legal thrillers, and a great insight into the life of those you don’t share a bond with.