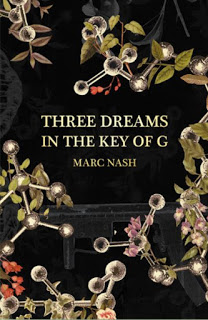 Three Dreams in the Key of G by Marc Nash is published today by Dead Ink Books. Did it strike the right chord for Tony Cross when he read it?..

So, I want to be fair to this book. I didn't “get” it. However, I think that might be more because of my own failings than those of the author. Nash clearly has a way with words, but sometimes I wanted those words to be more the words of ordinary people. No one - or no thing - in this book sounds like a normal human being.

Now, in one case, there's a bloody good reason for that, but not in every case and I think Nash suffers from what I'm going to call the Aaron Sorkin problem, which is that everyone - and everything - talks in an almost identical style. You can admire it a lot but, eventually, it just starts sounding a little odd. It's not bad writing, it's too much writing. It's reaching for the most impressive sounding word when sometimes a plain, ordinary word will do.

One of the characters is supposed to be a Northern Irish Protestant but she sounds like no Northern Irish Protestant I've ever heard. I know this sounds harsh but somewhere in here is a brilliant idea that just needs a less ostentatious outfit. It reminded me, oddly, of two very different books: ‘By Grand Central Station I Lay Down and Wept’ and ‘Blood Music’. The former I loved because it was a poem in prose. The latter I didn't enjoy because despite the central cleverness of the idea I found it a cold, dull thing. This books sometimes feels like ‘By Grand Central Station I Lay Down and Wept’ because the language has a certain poetry about it whilst steadfastly being prose. But like ‘Blood Music’ its cleverness isn't enough.

It's not that this is a difficult book, I recently read ‘The Sound and The Fury’ by which standards this is a Dan Brown novel, but there's something cold about it. Actually, again, that isn't entirely fair. Nash writes far better than I do. This review is a chaotic nonsense in comparison with Nash’s work. Perhaps there's a certain amount of jealousy here? Perhaps on another day, when the heat was less pressing on the Bakerloo Line, my little brain could have given this book the appreciation it probably deserves.

There is much to admire but I felt overwhelmed because, sometimes, there was too much. Too much style and too much substance. Too much self-conscious literary smartness? I couldn’t get a hold of it properly. And, once again, I admit this failure might be more about me than about Nash.

So, here I am dodging about trying to find the words to say what I want to say, which seems to not be a problem Nash is facing. I have read a lot of books in my life. There have been terrible ones, dumb ones, funny ones - and Nash does have the knack of carving out something smartly amusing occasionally - and wonderful books. This isn't a terrible book, in some ways it is magnificent, but it isn't my cup of tea.

And that, in the end, is the best I can do. I didn't enjoy this but I suspect there are people out there who will admire not just Nash’s art but also his craft. For me, the style overwhelmed the substance. Perhaps I'm not as clever as I like to think. Perhaps that's why this didn't appeal to me. No one likes to feel out of their depth.

Would I recommend it? No. Would I dismiss it out of hand? No. There is something here, I think, for some people. Just not for me. Which isn't a bad thing. Not everything is for me. But l’d say you'd do no harm by reading it and trying to establish for yourself its value.

I'm now worried this is falling with faint criticism, but an honest critic has to admit that sometimes they can't quite put their finger on what it is that they can't understand. And I have barely spoken of character or plot because - for me - all those things were overwhelmed by the language. So, if you have got this far and you still have no idea whether this is a book to read or not, then I apologise. I can only say what I can say. I will, however, say you won't feel worse for having read it and it will make you think. And is that such a bad thing in this time when stupidity is a something to be admired and cleverness scorned? No. It isn't.