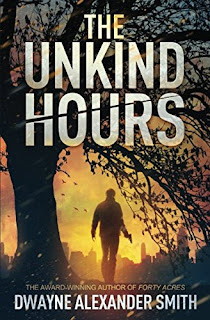 Steven Burns, a former major league baseball player, had the perfect life... until his five year old daughter is abducted and murdered. With zero suspects the police are left baffled and Steven must accept the haunting loss without justice.

A shadowy stranger offers Steven an opportunity to exact ultimate revenge. Compelled by fury and grief, Steven finds the stranger's unspeakable proposition impossible to resist, despite fears he's headed down a path of no return.

A while ago I read an astonishing book called Forty Acres that dealt with race in a way that rightly went on to be studied by smarter folk than I. Whilst, as a white British man, I didn’t grasp the concept as maybe I should have done, I was enthralled enough to know that Dwayne Alexander Smith was an author I was excited to read more from and just recently he self published the thriller The Unkind Hours and this book did affect me. The concepts within it were ones, as a parent, that quite honestly frighten the living shit out of me and I’ve never read a book on the subject matter that took me on such a dark rollercoaster ride of emotions as this one.

The thought of losing your child whilst they are in your care is a scary prospect. Losing that child to a paedophile whilst at something as innocent as a child’s sixth birthday party sends chills up my spine with my youngest having just turned six himself. To then discover your child has been murdered after days of abuse fills my heart with as much rage as it does dark depression, and this is where the story within The Unkind Hours takes a personal turn on the reader; what would you do if you could get hold of the person responsible? It’s a question that, at first, seems an easy one to answer, you seek justice legally or you want five minutes alone with the perpetrator but that’s when you’re thinking straight, in the heat of the aftermath and we never get five minutes with the criminal anyway. What Dwayne Alexander Smith proposes through his shadowy character in The Unkind Hours is the possibility you could and this element of the plot leads both Steven and the reader down a very dark path that shows a soul tortured.

The twists and turns in The Unkind Hours are impressive, just when you think you have a handle on what’s going on and who is who, there’s a massive curveball that ramps up tension. The Unkind Hours is an excellent taut thriller with a highly personal edge that takes a strong stomach to read and, at times, an iron will to keep to your own emotions in check. I’m not often this wrapped up in a book on such on a personal level and come the end I was exhausted, physically and mentally drained, which is a sign of a very good book indeed. I doubt very much I’ll read a thriller this good again for a very long time and I can only hope after two stunning novels that Dwayne Alexander Smith has a third nearly finished.