Doctor Who - The Beast Below 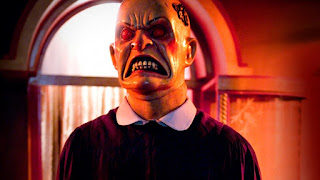 Our Doctor Who expert, Tony Cross, is journeying through all of time and space to bring us his thoughts on every available Doctor Episode. Today is the Eleventh Doctor adventure The Beast Below...

What can I say about The Beast Below? Well, it has its moments but mostly it is average. Which is OK. Not every story can be a work of genius and after The Eleventh Hour anything was going to be a come down. Well, almost anything.

Once more though the highlight of the episode for me was Matt Smith's performance as the Doctor. How good or not this episode is I'd have watched it just to see what Matt was doing. Throughout this he's wonderful. From his analysis of the darkness at the heart of Spaceship UK all the way through to the end. There are three highlights for me.

There's the little moment when he explains - as indirectly as possible - that he's the last of the Time Lords without making a huge song and dance of it.

Then there's the moment where, having looked at the 'tail/sting things' (that's my technical term for them and I'm sticking to it), he turns to Amy and explains that they really shouldn't have come. It becomes obvious later that he can hear the pain of the Star Whale, which he allows the human beings to hear. It's an echo of the scene in Planet of the Ood where the Doctor let's Donna hear the Ood song. In a way there's a thematic echo there to: what humans will do to enslave and control others.

Finally there's virtually the whole last five minutes or so when he tells Amy off for trying to stop him knowing something, even if it is something terrible (although she still won't tell him about her wedding at the end) and his speech, which ends with him saying something along the lines of: "And then I'll have to change my name because whatever I'll be afterwards I won't be the Doctor." [An interesting line that in view of what happened at the end of The Name of the Doctor but I'm jumping ahead again. Damn this knowing stuff thing.]

His response to Amy's little speech about the Space Whale being the last and how its age and loneliness just made it kind is also nice, although it is laid on with a trowel a bit. I don't mind being moved but I do slightly object to being so obviously manipulated. Perhaps I'm being harsh.

So watch this to watch Matt Smith in action.

I'm still not sure about Amy Pond/Karen Gillan. There's some nice bits 'n' bobs in here and I do think there's some nice chemistry between the her and Matt Smith, but she still seems to be feeling her way in the part. Maybe that's harsh again just because Matt's just taken his part by the scruff of the neck.

Again, there story isn't really the thing, although I love the idea of being allowed the choice to forget and The Moff's low opinion of human nature that makes him think that we'd be horrible enough to do it. We can't face the truth. It's another kind of perception filter really.

The throwaway line about Scotland wanting its own ship is rather funny as is the idea that the rest of the UK was so inept they almost got burnt to a frazzle because they couldn't get a spaceship up and running in time, whilst the rest of the world did. Including Scotland.

Oh and we get a little glance at one of those cracks again. In time and space. Oooh with these story arcs you are spoiling us. [Must resist this cynical tone]

Again a series of excellent actors’ flash by in small-ish parts but kudos to Sophie Okonado as Liz 10, the reigning British monarch (but obviously this Moff future Scotland is a republic). She plays her as a bit less posh than the current mob of actual royalty but that's reasonably apt and I do like her story echoing that of her subjects in terms of forgetting and remembering is rather nice.

See now I've written all that I feel I enjoyed it rather more than I thought. Hmmm, I really haven't got my head around this review lark.

Terrance Hardiman as Hawthorne does a fine job to, although he obviously is the one person on Starship UK that is aware of the whole terrible truth: the banality of evil. Or more truthfully another in the long line of Doctor Who people who believe the end justifies the means. Hence the police state, the Smilers (which are oddly sinister to start off with and then mildly disappointing when 'released')

Any road up to cut a long review short. It's not bad. Better probably than I felt at the beginning but not great.