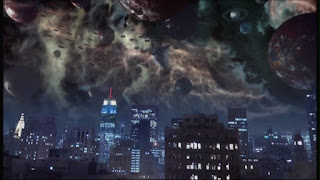 Our Doctor Who expert, Tony Cross, is journeying through all of time and space to bring us his thoughts on every available Doctor Episode. Today is the Tenth Doctor adventures The Stolen Earth, and Journey's End...

And so, Series 4 comes to an end in spectacular fashion.

Admittedly some of that spectacular comes from the stupid end of the spectrum: dragging the Earth through space on a tow line to the TARDIS I'm looking at you. And judging you unfavourably. Very unfavourably. But also, there's some spectacularly good stuff in there. The multi-layered cliff-hanger that ends The Stolen Earth is stunning (and we'll come back to that).

Journey's End does a fine job of setting everything up for the finale, getting all our characters in place and is the better of the two episodes. In my humble opinion. And there's a lot of characters to pull together. We get Sarah Jane and Luke, Torchwood (Captain Jack, Gwen and Ianto), Micky and Jackie from the parallel universe, Rose Tyler, Wilf, Harriet Jones and, of course, The Doctor and Donna. It takes some juggling to move them all around without it being chaotic and RTD does a grand job of that. It almost makes you wish RTD was writing the 50th Anniversary story because he'd be able to handle multiple Doctors on a grand scale. And in one sense of course this does end up being a multi-Doctor story.

I also like the fact that when we get the reveal that it is the Daleks via their rather terse broadcast to the world those characters that have already met and know the Daleks react in fantastically terrified manner. It's the seriousness of the responses that make the Daleks seem so terrifying. These are the universe's ultimate killing machines, so people should fear them.

Oh and I love the German Daleks. In fact, that whole little section in Germany I rather like. It'd be nice to have a Doctor Who story or two set in Europe. For variety's sake.

So we build up to the climax. Harriet Jones dies sacrificing herself to find the Doctor. The Daleks have found Torchwood and Gwen and Ianto are fixing to die fighting. Sarah Jane has lept into her car and gone off to find the Doctor. Captain Jack too is about to arrive. It's all kicking off. And then we get the Rose and Doctor meeting scene. It's all looking a little saccharine for an episode but what's this? Lurking behind a van. It's only a bloody Dalek. And the Doctor's down. Badly wounded. Dying. Bloody hell he's regenerating. How did they keep THAT a secret...? Music. Titles. Godsmacked.

However, the follow-up is slightly odd. The Doctor doesn't regenerate. Or does he? He certainly blows up in spectacularly energetic style but then he is using the energy to heal himself and pumps the residual into his old hand that he's been conveniently lying about the TARDIS for just such an eventuality. 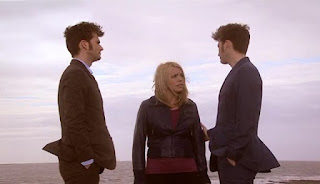 Have Time Lords always been able to do this? If so why 'use' a regeneration. Or does this count as a regeneration. Is Matt Smith Doctor Twelve (or Thirteen if we're counting John Hurt)? Does any of this really matter in the grand scheme of things? No, not really but for some reason I find it bloody irritating. But that's just the grumpy middle-aged man in me.

Sarah Jane gets rescued by Micky and Jackie. Gwen and Ianto are saved by a Time Lock security system aka The McGuffin. Now we're talking.

Everyone rattles together coming up with various ways to bring destruction to the Dalek's: warp stars, Osterhagan Keys etc etc. But the Daleks are ready for all this.

Oh in the meantime The Doctor, Rose, Captain Jack and Donna. Donna gets locked in the TARDIS which is about to be destroyed and it’s not looking good for our heroes. Captain Jack dies. Again.

Everyone gets captured. Except Donna who has been saved by a new Doctor grown from the Doctor's old hand via a metacrisis (whatever) with Donna. The new Doctor is human-Timelord. He sneaks off to build a weapon on which to attack Davros (Julian Bleach) and the Daleks.

Ah...Davros. How could I have got so far in this review and not mentioned him? He's back. And he's utterly barking mad. Not quite as mad as the Davros in Big Finish's Blood of the Daleks who is truly loopy but pretty much as mad as a box of angry frogs. He's build a reality bomb. Sorry a REALITY BOMB that can destroy everything everywhere in all universes. It's a big bomb and Davros isn't afraid to use it. Though it makes no sense and seems to just be an attempt to stick two fingers up at the rest of the Universe: if you won't let us conquer you then we'll bloody destroy you all.

Julian Bleach is brilliant as Davros. Not quite as good as Michael Wisher, who I think is outstanding in Genesis of the Daleks but pretty good nonetheless and I like the little moment between him and Sarah Jane when he realises who she is. The circle is complete indeed.

How the Daleks are supposed to get on after they've destroyed everything else is in the Universe is a moot point. Where will they get their supplies from? Who will they fight? They're a race that thrives on conquest who are they going to conquer if there's no one left? Surely it is a recipe for a Dalek Civil War? And which Supreme Dalek would trust Davros in the first place, especially a Davros who seems to be taking advice from a now loopy Dalek Caan.

Dalek Caan: also, a mad as a box of frogs. Possibly madder than Davros. Possibly not. But referred to as 'The Abomination' by other Daleks (which can't be good for ones’ self-esteem) and apparently driven mad by forcing it way into the Time War and dragging Davros out during which it apparently saw 'time itself' whatever the heffelumping hellfire that's supposed to mean.

By this point all the plans have led to nowhere. The Doctor has been given a quick lesson in what an utter bastard he is by Davros, which is a bit like the kettle calling the pot black but seems to upset him.

Then Doctor Ten Point One comes dashing in with Donna and fails to save the day but what's this. The REALITY BOMB has failed to detonate. How did this happen? Well it seems that Donna has had her brainwashed with the Doctors as part of the metacrisis that created the Doctor Ten Point One and knows how to say lots of scientific gobbledygook at a ridiculous high speed to explain that she's basically pressing some buttons.

The Doctor wins. Davros looks like he's going to die but not before he gives the Doctor one last - short - lecture on the inappropriateness of his behaviour. Everyone gets to pilot the TARDIS, which apparently needs six crew members to pilot properly now, which is fine. They then drag the Earth back to its proper place in the Universe by a sort of intergalactic tow rope attached to the TARDIS in one of the great comic scenes in Doctor Who history. Well, I laughed.

The Doctor drops everyone off at Earth. Captain Jack, Sarah Jane, Micky and Martha all drift off into the distance. The Doctor takes Rose and Jackie back to Bad Wolf Bay to say goodbye. Rose is a bit confused by this. She wants to stay with the Doctor, but he can’t, but he can leave her with Doctor Ten Point One who is basically human. And basically him. (And in one of my favourite retro re-writes grows up to be Peter Cushing, which is wonderful.)

I'm not sure whether that's a nice thing to do or not. It's certainly a novel way of getting rid of a clinging ex-partner.

Then we're about to set off to the stars with Donna and the Doctor but alas Donna can't process the Doctor's mind properly and it's going to kill her so the Doctor has to remove all her memories of their time together (although surely someone is going to bring up what happened at her wedding at some point.)

All mocking aside Donna's departure is genuinely moving. It's played with genuine conviction by both Tennant and Tate and reminded me of the departure of Zoe and Jamie at the end of The War Games. I did shed a little tear and again when Bernard Cribbins had his little doorstep chat with the Doctor in the rain.

So the edited review. Great first episode. Not so great second episode. And I going to bloody miss Donna. She was fantastic. Best companion in New Doctor Who so far. FACT. (Actually OPINION)

Next up: The Next Doctor