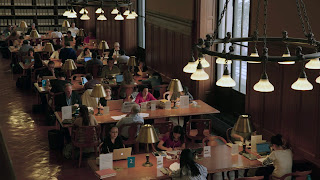 With the documentary now in select cinemas, a reminder of  Steve Taylor-Bryant thoughts on Ex Libris, from last year’s London Film Festival...

Frederick Wiseman’s film, EX LIBRIS – The New York Public Library, takes the audience behind the scenes of one of the greatest knowledge institutions of the world. The film examines how this legendary institution sustains its traditional activities while adapting to the digital revolution. EX LIBRIS – The New York Public Library shows that libraries inform and educate patrons in a multitude of ways- books, concerts, lectures, classes, and more. The Library strives to inspire learning, advance knowledge and strengthen communities

There is something quite daunting about pressing play on a documentary about libraries, especially when that film has a run time of nearly three and half hours and starts with a Richard Dawkins talk on atheism and the poetry of science, but I don’t think I’ve ever spent time more wisely. The documentary is a behind the scenes film behind one of New York’s biggest institutions and is more a collection of scenes than a narrated story so you do have to invest a lot of yourself in it to get anything from it, the film doesn’t tell you what to think or how to feel, you just watch the various scenes and interactions and make your own mind up about what you are viewing. I learned a lot, I was left wishing I had a better education for some of the subject matter that came up, a talk about slavery dating back to the seventeenth century and the fight between King’s and Clerics right up to present day was as fascinating as it was confusing and left me wondering if maybe more of these points and teachings need to be dripped into our own school education. Watching how some branches of the New York Public Library helped in children’s education, whole days spent reading and carrying out activities, was heart-warming and reminded me of my own childhood before technology took over lives sat in the local library enjoying my learning, and much of EX LIBRIS shows how a library can be used to both assist and build community.

The archives on offer at the New York Public Library was eye opening, with staff talking about everything from the Guttenberg Bible to 1950’s advertising techniques, from rare books on eleventh century monks first using the term ‘unicorn’ to being able to track an immigrant to the day and boat they arrived at Ellis Island on, there was something that tickled my fancy at every step of the film. How does a library system as large and as diverse as New York’s still run in the modern day? That gets covered in many scenes from the explanation of how 50% of the funding from private philanthropy leads to the City and the Federal Government investing more dollars which in turn leads to more private investment, to the copyright issues and ongoing conversations with publishers and authors about suitable compensation for taking the original text kept in the libraries archive and digitising it, mentioned by the board as ‘The Holy Grail’ and eventual aim of the institution.

You will all find a section of EX LIBRIS – The New York Public Library that appeals to you, whether that be their commitment along with The Lincoln Centre to artistic recitals, or just a reminder that a library is more than just a big room with books in it. The mentions of societal behaviour, our ill-gotten histories and persecutions of minorities across the centuries that make up part of the film get you thinking and discussing which is essential if as a people we are to make changes and learn from our past mistakes, and the beautiful cinematic way that certain sections are filmed make a sometimes uneasy subject matter more palatable. My overriding emotion after finishing EX LIBRIS – The New York Public Library is one of happiness, of memories of my childhood, of a positive outlook for the world of the future that my children are to grow up in, of an often forgotten or ridiculed and most definitely underfunded hub of community that needs to be drastically loved more than we do so the education of everyone becomes paramount.

The run time of EX LIBRIS – The New York Public Library should not be off-putting to a viewer, whilst it seems long at the start you soon discover that it only pokes at the tip of an iceberg, there is a wealth of information and support that all libraries can offer its constituents and even if, like me thousands of miles away, you cannot make a trip to this particular and fascinating place you can visit your own library. EX LIBRIS – The New York Public Library reaffirms our need as a society to have access to education, to have talks from people whose opinion may differ from our own so we can grow as a populace, and it also has books, many books.