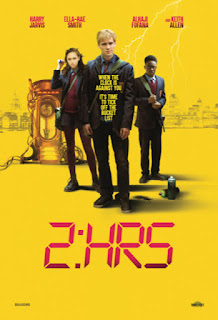 What would you do if you found out you only had two hours left to live?

That was the prospect that trouble-making teenager Tim Edge faced after he and his pals skived off a school trip to the Natural History Museum and found themselves deep underground in a hidden lab where a mad scientist is unveiling the Vitalitron to a group of assembled journalists. The machine promises to tell, to the second, the life expectancy of any living thing that steps inside it and the 16 tests so far carried out have all been accurate. So Tim sneaking into the machine and pressing the button when nobody was looking was always going to be a good idea, wasn’t it?

I’m annoyed by this film. Or should I say these films, because there are two films rolled into one here and it has spoiled both of them. Firstly we have a run-of-the-mill comedy caper of the Home Alone variety where the kids consistently escape the clutches of a mad haired evil scientist (Siobhan Redmond) and her “pretending to be a big shot American by Skyping with a picture of New York in the background” financier (Keith Allen) and are chased around London by a couple of very inept tabloid journalists (Seann Walsh and Marek Larwood) who are in it for the money and the story. With time ticking down, the chase gets more frantic, the comedy journalists get more stupid and the evil scientist gets more evil as she plots to make sure the machine’s prediction isn’t proved wrong.

The second film is a beautiful character study of teenage life. Tim (Harry Jarvis) and his sister live with their widowed mother and all the family trauma that the death of a parent brings – Tim is acting up, being selfish and rebellious trying to cope with his grief over a lost father, his sister is being bullied at school and the additional stress of a home life, where mother is too busy trying to keep things together, is close to pushing her over the edge. With family life being difficult, Tim turns to his friends (Ella-Rae Smith and Alhaji Fofana) for support and, when the machine tells Tim he has only two hours to live, they are the ones who try to help him achieve some of the things he’s always wanted to do in a heart-warming show of friendship.

The comedy could have been an ok fun kids film with an established comedy cast, slapstick humour and forgivably clunky writing which would have been something to keep the bairns quiet for an hour or so of an afternoon, even though the talents of Keith Allen and Siobhan Redmond are woefully underused. The coming-of-age tale could have been a brilliant film, exploring some quite deep and complex notions about teenage life in a very relatable way with a highly compelling group of young actors who made the screen spark with their chemistry. Mixing them together though killed them both for me. The emotion of the coming-of-age tale was trampled on, rather than lightened, by the stupid humour and the stupid humour of the comedy was dampened a lot by the potential for dark intensity of the coming-of-age tale.

However, looking for the good bits in between all the bad, the young cast were amazing, I look forward to seeing them in other things, and, as a premise, the idea of what you would do if you knew just how long you had left is an ever intriguing one and worthy of more serious exploration. In this case however, I feel that the film makers tried to overthink things and, in trying to please too many people at the same time, for me, it fell flat.


2:HRS will be available on VOD from 30th July