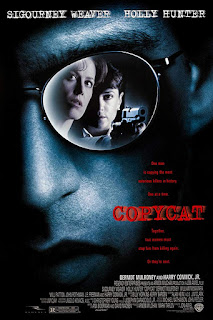 We made sure Steve Taylor-Bryant didn't copy anyone else's review as he watched the 1996 film Copycat...

In San Francisco, the criminal psychologist Helen Hudson is specialized in serial-killers. During a trial, the accused Daryll Lee Cullum kills a police officer and tries to kill her and she becomes agoraphobic. Now Helen lives a reclusive life with her gay friend Andy that helps her. Sometime later, there is a wave of crimes and Detectives M.J. Monahan and Reuben Goetz are investigating the murder cases. Helen identifies that the murderer is copycatting notorious serial-killers and she anonymously contacts the Police Department. After fourteen phone calls, she is identified by the police. Detectives M.J. and Reuben visit her and Helen teams up with them and prepares the profile of the killer that wants to be famous. But soon the copycat killer Peter Foley contacts and stalks Helen and M.J. and Reuben give protection to her. Will they be capable to stop Foley before the next murder?

I talk about my love of Copycat quite a lot. My wife and I have been discussing serial killer related films and television for a while now and we both come back to our love for Copycat and yet the detail in our memories is maybe not what it should be. Turns out we both saw the film upon release in 1996 but neither have seen it again since. To be fair that shows how good the film is that two people can remember it after 22 years despite having only seen it once, but even with our memory of how good the story is, now I wonder if the film holds up after nearly quarter of a century. Well that took a few weeks to get to as it's not as easy to get a DVD of the film as maybe it should be. Eventually a second-hand copy from Amazon turns up and so my attention turns to whether my memory is good or is letting me down after years of not being used properly.

Oh, it holds up. Story wise it was exactly as I remember it being, a taut thriller with nice twists, great examples of reality mixing within the fiction, a good narrative and structure, and the pacing is perfect. What I had forgotten is quite how good an actress Sigourney Weaver is. Whilst Dermot Mulroney, William McNamara, and Holly Hunter are as good as you would hope and expect them to be, and Harry Connick Jr. proves once again that he has never made a bad film (not everyone can look like he does in Copycat, wear those teeth, put on that accent, and talk about Sigourney Weaver’s knickers as currency with a straight face) it is Sigourney Weaver that yet again impresses. I have seen many Weaver films and am always impressed like I should be but for some reason I’ve never held her up in the higher echelons of respect like I do with Meryl Streep. Until I go back and watch something I haven’t seen for a while. It's lovely really as I’m surprised every time I see Sigourney Weaver in something, surprised at how good she really is despite knowing it. When I watch Streep, I expect a certain level of performance, but my expectations are never as high when it comes to Weaver, so I am constantly pleased. There is obviously something wrong with my brain, Weaver deserves more respect than I show her obviously, but I love the fact I am surprised all the time, it adds another level of enjoyment to any film of hers that I watch.

Ann Biderman, the creator of the wonderful Ray Donovan, has created along with David Madson (how good was Knightwatch?) a great look at all aspects of serial killing. The perspective from the killer is always a weird one to encapsulate but in Peter Foley they get it just about right, and the reluctance of law enforcement and psychologists to get along is almost as fascinating as the insights that both sides have. What the ensemble in Copycat have achieved is the bar by which I seem to have judged all serial killer films, apart from Hannibal Lecter, and so far, only Zodiac has cleared it. My fond affection for Copycat is safe, the film gives me a warm glow, and now I finally have a copy of my own then I will certainly watch it again and again. My love of all things serial killer is only added to by watching Copycat and I’ve yet to find a film that diminishes that love, although you may be able to suggest one?

Copycat is available to stream FREE on Amazon Prime