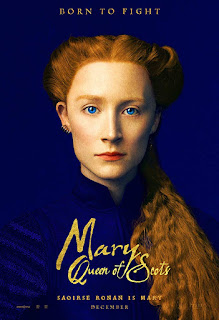 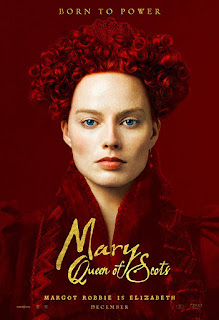 "A friendship that became a rivalry. A rivalry that became a war." Saoirse Ronan and Margot Robbie star in a new film about Mary Queen of Scots. Susan Omand goes off on a wee rant about the trailer...

Mary Queen of Scots explores the turbulent life of the charismatic Mary Stuart (Ronan). Queen of France at 16 and widowed at 18, Mary defies pressure to remarry. Instead, she returns to her native Scotland to reclaim her rightful throne. But Scotland and England fall under the rule of the compelling Elizabeth I (Robbie). Each young Queen beholds her “sister” in fear and fascination. Rivals in power and in love, and female regents in a masculine world, the two must decide how to play the game of marriage versus independence. Determined to rule as much more than a figurehead, Mary asserts her claim to the English throne, threatening Elizabeth’s sovereignty. Betrayal, rebellion, and conspiracies within each court imperil both thrones – and change the course of history.

Oh good grief, what is Ronan's accent about? Since Mary Stuart had a French mother (Mary of Guise) and, although born in Linlithgow near Edinburgh, spent the years from ages 5 to 18 in France, speaking French and betrothed to the Dauphin whom she married at 16, it's highly unlikely that she would have an (albeit not quite as dodgy as Ronan's) West of Scotland accent when she returned to the country, aged 18, after the death of her husband Francis, then King of France, to claim the Scottish throne that had been rightfully hers since she was 8 days old.

And what's with the blue? Mary was known as La Reine Blanche (the white queen) at the time of her return to Scotland because she was wearing the traditional mourning colour of white.

There was also no such friendship between the two Queens. As cousins (not sisters) there was an intense rivalry from the start, with Elizabeth trying to minimise Mary Stuart's claim to the English throne (Henry VIII having written the Stuarts out of succession in his will even though it should have been hers by right) by suggesting suitors for her that Elizabeth thought she could control. Therefore Mary did NOT defy pressure to remarry, instead recognising that the need for an heir was (if you pardon the pun) apparent and she, and others on her behalf, pursued many possibilities throughout the nobility of Europe before marrying Lord Darnley (another cousin, a Catholic AND an Englishman) and producing the necessary heir, James (who became James the VI of Scotland on the abdication of his mother and James I of England on the death of Elizabeth). This marriage incensed her half-brother the Earl of Moray and it is he, along with the other Protestant lords in Scotland who first raised troops against Mary, NOT Queen Elizabeth as the trailer seems to imply. There never was a battle between the two Queens.

It will be interesting too, to see if there is any mention of the murders (her husband Darnley killed her Catholic personal secretary Rizzio in a jealous rage and Lord Bothwell killed Darnley because he was "becoming a problem"), the rape of Mary (Bothwell again) her kidnapping (Lord Bothwell was not a nice man) and subsequent marriage of Mary and Bothwell (yes, really, Stockholm syndrome or what?) before he gets exiled to Denmark where he goes insane, or if this is going to be sanitised and kept as true to historical fact as Braveheart was, Australian star and all.

Anyway. Watch the trailer. The film comes out on December 7th.