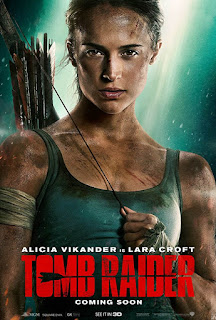 Out on DVD and Blu-ray this week, Steve Taylor-Bryant digs into the latest Tomb Raider film...

When the idea of a Tomb Raider rebooted movie was first mentioned I didn’t care. Not because of any sort of stance I may or may not have on original ideas or rebooted franchises, I honestly have opinions on a film by film basis, but because I am not a gamer, I have no affinity to the franchise of games, I was not really a fan of the Angelina Jolie movies which were just poor Indiana Jones copies with a beautiful woman in tight lycra. Then the film came out at the cinema and the online bile started to be spewed by certain quarters, but in the main the reactions were positive. Colleagues and friends whose opinions I trust told me it was worth a go and so I researched one of the newer games to get into the frame of mind of what the film should try to accomplish and awaited the Blu-Ray release. My initial thoughts when the credits rolled? What a wonderful action film that was just a couple of beats short of perfect.

Lara Croft is the fiercely independent daughter of an eccentric adventurer who vanished when she was scarcely a teen. Now a young woman of 21 without any real focus or purpose, Lara navigates the chaotic streets of trendy East London as a bike courier, barely making the rent, and takes college courses, rarely making it to class. Determined to forge her own path, she refuses to take the reins of her father's global empire just as staunchly as she rejects the idea that he's truly gone. Advised to face the facts and move forward after seven years without him, even Lara can't understand what drives her to finally solve the puzzle of his mysterious death. Going explicitly against his final wishes, she leaves everything she knows behind in search of her dad's last-known destination: a fabled tomb on a mythical island that might be somewhere off the coast of Japan. But her mission will not be an easy one; just reaching the island will be extremely treacherous. Suddenly, the stakes couldn't be higher for Lara, who-against the odds and armed with only her sharp mind, blind faith and inherently stubborn spirit-must learn to push herself beyond her limits as she journeys into the unknown. If she survives this perilous adventure, it could be the making of her, earning her the name tomb raider.

Not being a gamer that grew up with Tomb Raider I had been immune to the games reboot by Crystal Dynamics. I didn’t know much about how they had changed the character from a story perspective, but visually Lara Croft looked more like an actual human woman rather than a centrefold that manages to rock climb and, in Alicia Vikander, the film's version of Lara Croft is almost spot on. The diminutive frame may not be traditional early Lara, but the big heart and determination most certainly is, and I think that’s the stand out aspect of Tomb Raider. Alicia Vikander’s Lara is incredibly determined, shows a lot of bravery, but has emotions, is not ashamed to show fear, and Vikander’s physical training in preparation for the role brings to life a Lara that you could imagine raiding tombs. Her chemistry in the film with her father, Dominic West, and with her reluctant captain Lu Ren, Daniel Wu, is superb, believable, emotional, all the facets of human interaction that you want from a film and it is many of these scenes that elevate Tomb Raider beyond just action fare. But after you’ve told a great backstory, and it is, and you’ve given some main characters some much needed good dialogue and depth, you still must nail the action and stunts and my word they accomplish that with aplomb. Its hard enough doing action sequences that look realistic in this CGI day and age, but with combined stunt, wire work, practical effects, and computer animation Director Roar Uthaug and his team bring together the very essence of a Tomb Raider computer game with the modern look of a blockbuster movie.

The film isn’t without small flaws, Walton Goggins continues to get work despite being only able to play Walton Goggins and that weakness in the film's main evil protagonist took me out of the story on occasion. All in all,though, there would be no doubting this film as a great action flick if the cast list said Tom Cruise, or The Rock, or even Jason Statham, and so I can only imagine that most of the griping and negativity is because it’s a female led film. There is phenomenal production design, especially within the tomb, incredible stunt sequences, some humour and depth, and a lead that seems to embody the part like it was written for her and I for one hope to see a sequel announced soon. This was a very different Lara Croft film which is good because the other versions were just awful.