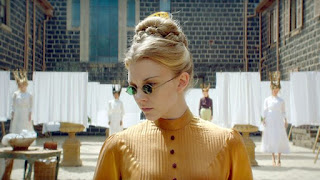 Ahead of the first episode next week, BBC have released an interview with some of the stars in the new adaptation of Picnic at Hanging Rock...

In the final decade of the 19th century, beautiful and mysterious widow Hester Appleyard (Natalie Dormer) arrives in Australia, haunted by a secret past.

Paying in cash for an isolated mansion out in the bush, she establishes a school for young ladies - and six years later, Appleyard College is a success. An enigmatic headmistress, something haunts Hester. Is it the bush - dangerous and untamed? Or is it her own secret past?

Confronted by the unwelcome advances of a young soldier headed for the Boer War, Miranda impales his foot with a pitchfork, earning her headmistress’s contempt for her lack of self-regard. Punishing devoted young orphan Sara (Inez Curro) for Miranda’s recklessness by keeping her back from the outing, the rest of the Appleyard College ladies go on a picnic on St Valentine’s Day, 1900, with their governesses to Hanging Rock.

However, in the strange brooding landscape of Hanging Rock, something unthinkable happens...

Described as "A penetrating reimagining" of the 1967 novel by Joan Lindsey, Picnic at Hanging Rock plunges the viewer into the mysterious disappearances of three schoolgirls and their governess on Valentine’s Day, 1900. The complex, interwoven narrative charts the subsequent investigation and the event’s far-reaching impact on the students, families and staff of Appleyard College, and on the nearby township. Theories abound, long-held secrets are exposed, paranoia and hysteria set in, as in vastly differing ways the lives of the characters are changed for ever. Tapping into the fear of the unknown, the series explores issues of repression and sexuality, freedom and suffocating respectability, speaks to notions of nationhood and identity, the old world against the new, nature versus order. 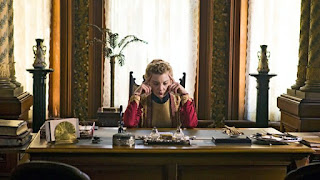 Tell us about Picnic at Hanging Rock…

For years people didn’t know the story behind Picnic at Hanging Rock - whether it was true and whether it had actually happened. A group of girls go for a picnic on St Valentine’s Day 1900 and three girls and one teacher disappear. What happened? Are they murdered? Are they alive? Everyone becomes obsessed and intoxicated by this mystery.

What made you want to do this series?

I was attracted to this project because of the script. I thought the way this whole community and school had been fleshed out between the lines of what is present in the novel was wonderful. And then of course what you have overarching the entire thing is this delicious mystery: what happened to those girls? What happened on the Hanging Rock?

There is a magic that we have very much injected into our reimagining of Picnic at Hanging Rock, one that is hopefully very faithful to the tone of the novel.

What was it like to film on location in Australia?

This was my first trip to Australia, so to stand in the Macedon region and look out over the Hanging Rock made a big impression on me as well. No acting required. I was overwhelmed by the beauty and scale of Australian landscape. The Australian landscape is a character in itself in Picnic at Hanging Rock. It has an overwhelming power and informs a lot of the characters’ journeys.

Who is Hester Appleyard?

There is no greater mystery than who is Hester Appleyard. She’s got something to prove. She’s come to Australia, as a lot of people did at the end of the 19th Century, to reinvent herself, to completely give herself a new identity. We slowly reveal the ghosts and the baggage of that past - who she is and this little kingdom that she has created ten thousand miles away from home to hide from her past. 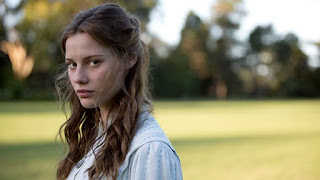 How would you describe Picnic at Hanging Rock?

I think we are taking a classic and a beautiful, period piece - and destabilising it. It’s also following powerful, beautiful, strong, twisted, tormented, flawed women.

Tell us about your character, Miranda…

Miranda is a bit of a dreamer. She has to be, considering the world she has been thrust into. She definitely likes to escape reality. She’s earthy, strong, opinionated… I think that comes from growing up on a farm with four brothers, totally treated as an equal - gender does not apply whatsoever. I think out of all the girls she’s really tasted the notion that women are equal to men.

What attracted you to this project?

Growing up, it was my mum’s favourite film - so I had seen it a bunch of times. As a kid there was that haunting element, but then also the beauty of it… I was so excited to jump into the TV adaptation, because the film is such a beautiful, moving poem.

How did you prepare for the role?

Before I found out I got the part - the day before my final audition - I went to the Rock for the first time and started running my lines dramatically whilst having a picnic on one of the big, giant boulders - looking out onto the horizon. It was wonderful.

I also read the book for the first time. It was so exciting to see that Joan Lindsey had such a hatred and dislike of the idea of time. The movie captures that really weird, lucid feeling. It was wonderful to dive deep into all of the characters’ subconscious and psyches - and to then read Beatrix’s adaptation of the script, which is so much deeper and darker and messier and real. It’s the grittier side. It’s exciting. This house is this big vortex, it’s the heart of all of these strong spirits.

I think all the characters are a different version of one another. It’s one human. We’ve got Marion, who is the intellect. We’ve got Sarah, the innocence. Mrs Appleyard is the broken, fractured woman. Miranda is the earthy, free-spirited one. Irma is unapologetic, wealthy, upfront… She has that power that wealth could always bring you then, a power that women should always have anyway. 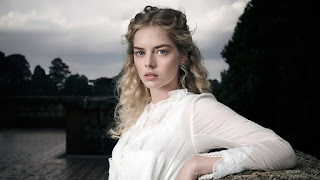 Who is your character?

There’s actually a line from the book that I thought captures Irma the most. It’s quite simple, it says “Irma likes beautiful things.” There’s the obvious, narcissistic side to that, which is that she like jewels, wears the fanciest clothes and gets things imported from France. But on the flip side, Irma wants the world to be beautiful - she wants it to have a heart and to be sparkly.

How did you feel when you found out you’d got the part?

When I first found out I was cast, I was just overjoyed to be a part of something that is this quintessential Australian novel and story. It’s so quintessential that people think it really happened! I was just elated. Irma was the character that I really wanted to play, so it was really good.

Wearing these costumes is pretty uncomfortable! It was really fun at first, it was like a bucket list thing. But in reality, it’s very uncomfortable wearing a corset for ten hours a day. You can’t really breathe. There’s a lot of layers and they all take a long time! I just don’t know how women did it back then. It would take hours to dress and you had to rely on someone else to dress you, because you can’t put on a corset by yourself. It was very oppressing.

How was filming at Hanging Rock?

Filming at the Rock was really exciting, because I’d never been there before and you do feel this sense of magic. Not so much in the sense that Joan Lindsey had created, but because it is such an amazing place for the indigenous communities and it was amazing to come and meet those who have been telling stories there for so many years. You can feel the historic and religious energy from being up there.

What can audiences expect from the series?

This show is not based on the film, it’s based on the book with its multiple storylines. It’s not ethereal and feminine like the film, this is really rock and roll. It’s punky and punchy. It’s going to be so awesome and bad-ass. 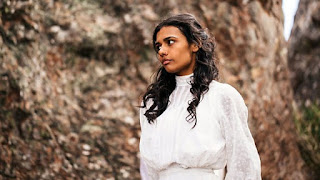 Who is Marion Quade?

Marion Quade is a total bookworm. She’s very independent and she prides herself on her intelligence. She’s also really brave and follows her heart. She isn’t afraid to show who she really is. She draws a lot of strength in doing that from Irma and Miranda. When I first heard that they were doing a remake and that I’d got an audition I was quite surprised, as I never would have imagined myself to be in Picnic at Hanging Rock. From then I knew it was going to be something quite exciting - and a challenge.

What preparation did you do for the role?

Marion’s character is someone who is not often spoken about or celebrated in history, but she is one of those women that definitely would have paved the way for society and women. I did have to do a lot of research into how women spoke and what roles women like Marion had in society. I did a bit of research into the women from the British Indian colonies to see what their roles were. They were perceived as being quite exotic - a bit of an outsider, which is what Marion really is. She’s an outsider.

It would be really difficult to live in that era. Especially for women, they had no control over their bodies or what they wanted to do or who they wanted to marry. That was all up to somebody else. I definitely could not have lived in that era. There was just no freedom and women were so suppressed emotionally and physically - the corsets mean you are so restricted to what you can actually do.

What was it like to film at Hanging Rock?

It was amazing filming up at the Rock. I’ve worked there before on a job before I got this one. It was really important for me to be welcomed to the Rock by the clans that surround the Rock. To go into such an important place, which means so many different things to different people - it was important to go in respectfully and to leave respectfully. You can feel that it’s a very spiritual place. Everyone was saying that you get this feeling when you’re up there, because it does hold such significance.