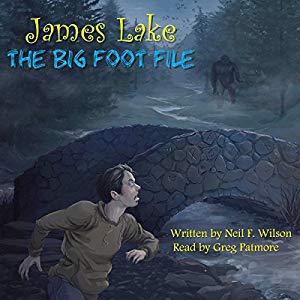 I have always been interested in the extraordinary: extra terrestrials, the Loch Ness Monster, vampires, and Big Foot are good examples. There is something mysterious about studying the unknown. Do they exist? Gathering evidence and debunking anything that doesn't stand up to close scrutiny. Fact over fiction.

James Lake is certainly the biggest debunker, he even uses his findings as a way of introducing himself to new classmates. So, what is The Big Foot File about? Well, 12-year-old James relocates from No. 12 Sycamore Drive, Sarasota, Florida, to a new home in Washington. It means leaving behind best friends Fiona and Jordie. Never mind, at least there are no bullies at his new school. Well, maybe there are, but they won't notice him. Will they?

Bullies aside, James does make friends with Edward and Megan, and together they investigate Big Foot sightings. It's an exciting obsession for everyone, but can the greatest debunker literally debunk Big Foot? It's certainly fun finding out.

Though over 800 miles away, best friend Fiona is never far from his thoughts. James can't wait to call and tell her about his new life. It does seem, however, that it is not only he who has moved on. In addition, there's a jealous Blake to contend with, whose schoolboy crush on Megan becomes an obstacle.

Author Neil F Wilson manages to capture a nice blend of drama and humour during the course of the story. It's an intriguing tale with plenty of interesting characters. Megan is one of my favourites besides James who, of course, you rally for from day one. We've all been there, letting go of the past to face new challenges.

So what of the audiobook? Greg Patmore delivers a steady performance as narrator while enriching each character's personality for the listener. With numerous credits to his name including Big Finish's Dark Shadows audio dramas, Greg is no stranger to the world of audio.

Overall a lovely telling and a book everyone should try at least once.