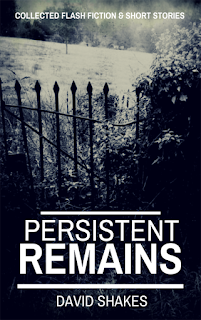 Susan Omand finds a quiet corner in the dark and reads Persistent Remains by David Shakes...

That's from the first short story in David Shakes' new collection, Persistent Remains and it is a very appropriate opener. However, even if these are "just stories," David is more than "just" a writer as the rest of the book attests. He has an artist's eye for an imagery filled phrase; "a familiar covering of dust and doilies" immediately sets a scene in an old persons front room. And yet, in a different story, he has a lyricist's way to touch the soul with lines like "if you'd caught and kept the tears you've shed and one day drank...". But wonderful word weaving like that, makes the only officially designated poem in the book a bit of a disappointment for me. It's obvious that he has the connection with the world needed to make poetry work but the forced nature of dealing with rhyming and form in this one he has included in the book gave me the impression he tried too hard with it to get it "right" rather than letting his natural wordly talent flow and this has resulted in something trite and generic that doesn't sit well with the rest of the stories.

Because the rest of the stories are very, very good indeed. Often coming with picture prompts or a short note about the inspiration for them, these flash fiction tales are told in various voices, the young, the elderly, even a dog and a cat in some of them, and they feature many different settings, modern cities, deserted roads and many many small town suburbs. Three things come through strongly in all of them though - firstly, it's interesting that we don't get a name for many of the protagonists. Personally I like this because it doesn't overtly suggest anything about them, allowing you to discover the characters as the story unfolds - no mean feat in a flash fiction length. Secondly, I was surprised, for a British author, at how American the stories felt, although that may be more me projecting my own imagery to the stories rather than how it was meant - it works anyway. Thirdly is how much darkness there is. This is not a horror book per se, there is little in the way of gore, but it is disturbing and there are ghosts in every page. Not just physical manifestations either but ghosts of memories, of missed chances and might have beens.

This is, therefore, not a happy book that's full of froth to brighten your day. Instead it is the provider of an almost comforting melancholia which will stay a while after you have turned the last page. The persistent remains, I guess.