Book - The Sound and the Fury 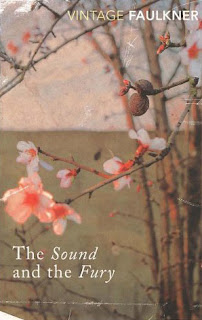 Tony Cross takes on a book of perspectives as he reads The Sound and the Fury by William Faulkner...

Depicting the gradual disintegration of the Compson family through four fractured narratives, The Sound and the Fury explores intense, passionate family relationships where there is no love, only self-centredness. At its heart this is a novel about lovelessness - 'only an idiot has no grief; only a fool would forget it. What else is there in this world sharp enough to stick to your guts?'

This is a difficult book not because it is about difficult themes. In some respects, it has a plot that wouldn't feel wrong in Dallas. It's a family disintegrating.

It is stylistically that it is hard. This book makes you work. Divided into four sections on four separate dates each section has a different narrator.

The first section (April 7, 1928) is narrated by Benjy Compson, who is mentally disabled. No one in his family seems to find him as anything less than a source of grief and distress. Except his sister Caddy. His mother, Caroline, who is a hypochondriac seems to see him as a punishment. This section is shifts constantly in time and setting. It's hard work but inside the impressionistic language we learn the key events that we are to find out more about in the other sections and we get an idea of people's characters.

The second section (June 2, 1910), which is also stylistically difficult is told from Quentin's point of view. Quentin is the Benjy's brother and is at Harvard. The chapter focuses on the day of his suicide. Again, though this section is chronologically all over the place. Events elide into each other, but we gradually find out about the Caddy's 'disgrace', Quentin's attempts to cover for her and his father's weirdly unbothered view of the world. It also starts - as Quentin falls apart mentally - to lose all grasp on grammar, punctuation becoming a stream of consciousness ramble. This section almost requires a notebook. I, for example, thought for a while that Quentin had been involved with Caddy incestuously, but I eventually realised that this wasn't the case. But it took some work.

The third section (April 6, 1928) is told from Jason's point of view. Jason is a prick. He's a bitter, angry, money obsessed racist. The n-word is used a lot in this novel. Pretty casually. Jason uses it with a savagery. He's a blackmailer and a thief. He's cruel. He's vindictive. He's one of the great horrible characters in fiction.

The final section (April 8, 1928) is told in the third person but focuses mainly on Dilsey, the black servant who effectively runs the Compson house despite Jason's claims. It's the most straightforward section of the book in some respects.

It's a tough read. I'm not sure I can honestly say I enjoyed it, but the conquering the difficulty felt good. I think I understood it. And you can't knock this book for a lack of imagination or invention. The writing is also stunning in parts and the characters are vividly bought to life both directly and indirectly.