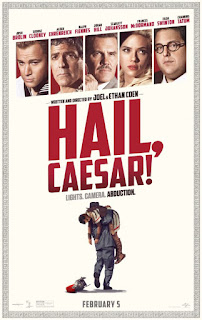 Number five on The DreamCage Favourite Director's list is the Coen Brothers. Ren Zelen looks back at Hail, Caesar!...

After the Coen Brothers last few offerings such as ‘A Serious Man’, and ‘Inside Llewyn Davis’ I was worried that they might have abandoned their unique sense of humour and were opting to make ironic and misanthropic stories of existential angst. The opening shot of ‘Hail Caesar!’ - a crucified Christ figure in a Catholic church, made me slightly uncomfortable as to what else might be in store. As it turns out, ‘Hail, Caesar!’ is the breeziest and sunniest tale the Coens have ever produced. Set in a glowingly idealized and vibrantly technicolour version of Hollywood’s golden age, it still displays the cleverness and attention to detail that makes all the Coens’ films worth viewing.

A parallel Coen Brothers’ movie might be ‘Barton Fink’, but in that movie they explore the more vicious heart of Hollywood, flinging earnest playwright John Turturro into a Kafkaesque-like hell which has him writing wrestling pictures while wrestling with his own sanity.

‘Hail, Caesar! is entirely more comedic than its predecessor, and the Coens obviously know enough about the history of the movie business and its studios to make more than one or two wry and satirical observations about their subject matter.

Set in the studio system of the early 1950s, harried executive Eddie Mannix (Josh Brolin) is busy trying to solve the problems of the actors and filmmakers at Capitol Pictures. His latest assignments involve a disgruntled director, a naïve singing cowboy, a pregnant swimming star and a good-looking, athletic dancer. The Coen Brothers based their principal character on and used the real-life name of one of the most notorious figures in Hollywood history (a person employed to cover up some very dark deeds indeed) but Brolin’s entirely fictional Mannix is played as a stressed ‘Head Of Physical Production’, a family man consumed by guilt and a devout Catholic.

George Clooney plays the studio’s male star, a narcissistic actor called Baird Whitlock, who disappears from the set in full costume after downing the contents of a wine goblet containing a sleeping draft as part of a scene. Soon the executive Mannix starts getting notes and calls from a mysterious group calling themselves ‘The Future’ and demanding $100,000 for Whitlock’s return.

The Coens have packed ‘Hail Caesar!’ with storylines, most of which start off apparently unconnected to the main events, but by the end all come together in a tangled web. If anything, the movie is so stuffed with cameo turns that one can’t really get one’s teeth into any major developments, and events go whizzing past on a dazzling, brightly-lit merry-go- round of delightful scenes. Sadly some of the many stars that appear never get the chance to make their mark (I’m thinking of an underused Tilda). The cornucopia of jaunty cameos also swamps the usually compelling presence of Josh Brolin, notionally in the lead role, whose dour countenance sometimes seems out of step with the playful mood. 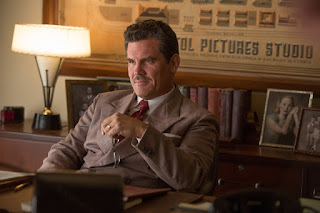 Primarily, of course, it’s a chance for the Coens to show off more of their considerable movie-buff credentials - the studio setting allowing them to recreate a range of Hollywood output, from singing westerns to drawing-room melodramas to elaborately staged aqua-musicals in the style of Busby Berkeley and featuring Scarlett Johansson as an Esther Williams-style bathing beauty.

Although George Clooney is again allowed to ‘let his hair down’ in a Coen movie and clown around, the absolute standout comedic scenes for me were between Ralph Fiennes and Alden Ehrenreich as a long-suffering director attempting to get sophisticated diction out of the strangulated tones of a sweet, but unrefined actor called Hobie Doyle, hitherto employed as a singing cowboy. I can’t remember the last time I actually laughed out loud in a movie theatre (certainly not in any of the more recent movies touted as ‘comedies’). Ralph Fiennes reminds us what a hidden force he is in comedy, attempting to be the soul of patience through gritted teeth, and Ehrenreich turns out to be his equal as the ingenuous cowboy who is not as dumb as he seems.

A mention too for Channing Tatum, who has proved himself game for anything, and who gives a wonderfully adept performance in the goofy, Gene Kelly-style (and ultimately homoerotic) ‘No Dames’ musical number and is then revealed to be one hunky dancer who is harbouring an unexpected secret.

When the Coen Brothers let rip with their particular brand of wacky and sardonic humour, it does seem to bring out comedic traits in the most unlikely of actors. The directors and cast clearly had a lot of fun making this film, and I should give an honourable mention to Michael Gambon, who,(not known for a pokerfaced attitude to his profession at the best of times) puts on his fruitiest tones to enunciate the typically overblown ‘Hollywood’ dialogue which makes up his narration.

In relation to ‘The Big Lebowski’ the Coen Brothers were asked about whether they were influenced by the Technicolor musicals of Michael Powell and Emeric Pressburger, and remained characteristically cagey. In ‘Hail Caesar!’ they acknowledge their debt by scoring the water ballet to Offenbach’s ‘Tales of Hoffmann’ (in homage to the 1951 film of that name). They also appear to give a nod to the legendary king of screwball, Preston Sturges. (However, no-one, including the Coens, can make a movie with the verbal skill and breathless ease of an actual Sturges production).

Joel and Ethan Coen are canny cinematic magpies - plundering, mixing, reviving and recycling all kinds of genres, styles and crazes found throughout film history. For more than two and a half decades they have been intriguing audiences with their distinctive blend of dark humour, colourful violence, and visual flair. With ‘Hail Caesar!’ we might find ourselves waiting for the revelatory moment of seriousness or menace, but it never comes. This Coen movie is not encumbered with significance, but is an exercise in affection for the simple art of entertainment.