Doctor Who - The Impossible Astronaut & Day of the Moon 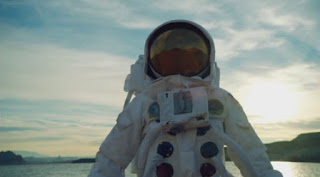 Our Doctor Who expert, Tony Cross, is journeying through all of time and space to bring us his thoughts on every available Doctor Episode. Today is the Eleventh Doctor adventures The Impossible Astronaut & Day of the Moon...

I really enjoyed that.

This is the first time I've re-watched them since first broadcast and I found them more enjoyable on the second watch - with perhaps a couple of quibbles that I shall come to later if I can remember what they are.

I had to stop myself from pulling into this story what I already know from further down the line even though that's impossible really. I did try though. However, I do have one question, which I shall raise in a later review, when it is less of a spoiler.

This has all the timey-wimey-show-stopping-smart-arsery that irritates people about The Moff. A shocking moment down at the Lake, a twist in time and a set of mysteries for us to contemplate, some of which have only just been answered in the final moments of Matt Smith's Doctor. There's a lot going on here. Seeds being sown, and threads being picked up from previous stories (including Silence in the Library-Forest of the Dead and The Lodger).

River Song is here, and I like her more with each appearance. I should first admit to a soft spot for Alex Kingston, which may make me a little biased, but I think she's great in this story. Some people complain that River Song undermines the Doctor, but Romana did too in a similar way and no one really whinged about that. You think I'm wrong? Look at the scene in The Horns of Nimon when Romana shows the Doctor her sonic screwdriver, which is so much better than the Doctor's he tries to nick it. Now make Romana River Song and The Doctor...erm...The Doctor. See. I'm right. In fact, for a while I thought River Song might turn out to be Romana. I think River and the Doctor work well together.

Yes, I'm as uncomfortable as the next old-school fanboy with the Doctor snogging anyone but you know I'm more convinced he'd fall in love with River Song than I am that he would do so with Rose as an example. Yes, sometimes the flirting is a little too much but at least it is witty. Most of the time. Plus, Alex Kingston and Matt Smith have a certain chemistry that one would be churlish to deny.

Anyway the story itself includes some genuinely creepy moments and at points has a Buffy the Vampire Slayer vibe about it. Particularly in the abandoned children's home with its dazed and crazed staff member, Dr Renfrew (Kerry Shale) - which is surely a Dracula reference. I love Shale's performance here and that whole sequence brings home rather nicely how spooky a set of villains the Silence are: a sort of Men in Black meets The Scream. I'm don't entirely buy the 'they've been here since the dawn of mankind' bit as I'm sure The Doctor might have noticed before now but I like them.

The problem with blogging these two episodes is there is so much going on here: the mysterious little girl and her ability to regenerate; the Doctor's 'death'; the Silence; the mysterious eye-patch lady; Canton Everett Delaware III (a rather brilliantly gruff Mark Sheppard adding another science-fiction/cult television franchise to his CV); President Nixon played not as an out and out villain - I love the 'hippy' - 'archaeologist' exchange btw; Amy's pregnancy/non-pregnancy; the mysterious invitations and so on. It's packed full of stuff but none of that seems to slow it down. In fact - well, not fact but anyway - they fly by. I like the way that not all of these things are solved at the end of this episode, although I'm not entirely convinced the Doctor would shrug it all off so casually at the end as he does.

I particular love the end of the Impossible Astronaut and the way it flips into the beginning of Day of the Moon six months later with the Doctor a prisoner and all his companions dead. Or not.

I think this is the story where I really began to like Karen Gillan's performance as Amy. I always liked Arthur Darvill's Rory but now Gillan seems to raise her game and the two of them together are something rather good. I didn't think this at the time, but it is nice to have a proper relationship inside the TARDIS after all this time. This is Ian and Barbara for the 21st century television viewer. Or how I'd have liked Ian and Barbara's relationship to pan out. * 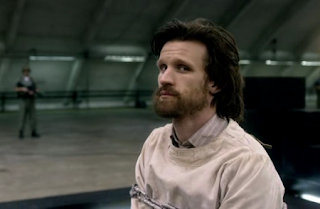 And Matt Smith is simply magnificent. After one season he seems to have established himself in the part. Once again - is this a Doctor actor thing - he's at his best in the quite moments. This isn't a Doctor who needs to raise his voice to be authoritative. He's so good I keep forgetting that the lucky bugger's younger than I am. Matt Smith conveys the air of a man older than his apparent years who is carrying the weight of the world - or Universe - upon his shoulders. It's Matt Smith's brilliance that holds all this stuff together. I remember feeling that here was a Doctor that might rival Tom Baker in my affections. If the scripts were good enough.

Questions: How does the Silence's forgetting effect work via hologram? Was it necessary to kill that poor woman in the White House toilet? How did the Silence's time-machine thingy end up in The Lodger? Should we be quite so comfortable with the Doctor's apparent comfort with River Song killing people? Is all this timey-wimey stuff cheating, even if it is all rather clever? What has happened to the Laws of Time? Did anyone not ask what the men in the White House were shooting at? And so on.

In the end this is rather good fun, which is what I ask for from a Doctor Who story. There's lots of questions to be answered and let's be honest this is a bloody fantastic way to kick off a new Doctor Who season. With a bang. Not a whimper.

*Oh come on surely, I'm not the only one who thinks Ian and Barbara got it together when they got back home. After all it's obvious they'd been getting it on in The Romans.