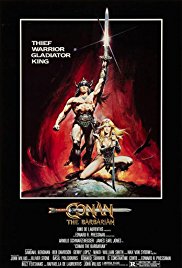 Thirty six years ago yesterday (but who's counting) Conan the Barbarian hit our cinema screens. With nothing better to do on a rainy bank holiday weekend, Susan Omand watched the film...

James Earl Jones hardly ever gets to be the bad guy in movies does he? Yeah, ok, APART from being the voice of Darth Vader, he hardly ever does. But he does in Conan the Barbarian. I’ll be honest, the first time he popped up in the film (right at the start when he’s being all decimate-y with young Conan’s tribe) I didn’t actually know it was him.

So bad guy Jones with a snake fetish (appropriately called Doom) kills Kid Conan’s family and the rest of the tribe in his search for steel - we are talking pre-dark ages Mongolia-ish place here so I guess steel is still a new fangled thing. As an aside, though, why do these fighty horde guys never get hat hair when they take off their helmets? Anyway. All the children are rounded up and led north to be put to work as slaves walking round in circles pushing a mill wheel round. And it turns out this is good training to end up as a muscly pissed off grown up. Sold into gladiatorhood, Conan learns fast and ends up winning all his fights, mostly in very messy crunchy ways, and earns his freedom for some reason (I don’t know, if he was that good why did the master let go his golden egg killer?) and he is able to start his quest for revenge. Another aside, is it only me that says “revenge” in a high pitched voice because of playing too much Worms on the PC back in the day? It is? OK, never mind then.

He finds a sword after being chased up a cairn by a pile of dogs (no, not cairn terriers) and is set on the right path to finding Doom because he bonks a witch in return for some directions (I’m guessing pre-dark-ages sat navs worked differently.) Along the way he meets up with Subotai, a Hyrkanian thief and archer, a weird wizardy type that lives in the sand dunes and Valeria, a Brigand. Subotai and Valeria join with him to rob a sacred snake tower, just because, which attracts some attention. The King of the area is impressed with their sneaky snaky stealing skills and hires them, with buckets of rubies, to get his beloved daughter back from the head of the snake cult who is none other than, yes, Doom. Handy that, eh? Valeria and Subotai aren’t keen on the idea, despite the ruby buckets, so Conan goes on alone and, disguised as a priest, gets into the big bad’s temple. However, being about 2 ft taller and wider than every other priest there, he is soon found and tortured, getting nailed to a tree for his troubles (hang on, isn’t that someone else’s story?) Subotai has been following though and rescues him, taking him back to the dune wizard who, at Valeria’s insistence, draws all over Conan’s face with marker pens and heals him, although he warns Valeria that there will be a price to pay for that later (I guess marker pens were expensive back then).

Subotai and Valeria then accompany Conan back to the temple where they manage to get the, very reluctant, girl back only to lose her again in a fight with Doom and his guards, where Valeria is mortally wounded to the point that not even drawing on her will save her. Cue a revenge top up for Conan and a massive end-of-level battle, that includes a training montage and everything, where they manage to get rid of the vast majority of the guards with booby traps and speary things, get the girl back… again… and Conan gets to do the ceremonial slice and dice of Doom atop the steps of the temple before setting fire to it all and riding off into the sunset. The end.

OK, as much fun as this was I’m going to say it… with the prevalence of comics movies around just now, Conan could maybe do with a remake to sharpen up on the rubbish effects. What? They’ve done one already? With Jason Aquaman Momoa? Why did nobody tell me??