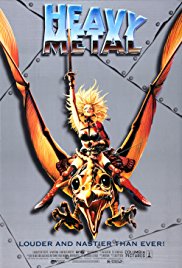 Thirty seven years ago today, an... unusual (yes, that's what we'll call it, "unusual") animation hit cinema screens. So we made our unusual animation fan Susan Omand watch it...

Riiiiiight. I think I’m maybe three chemicals short of being able to fully appreciate this in all its glory on a first watch.

It’s really a collection of short stories, based on the idea of Heavy Metal Magazine, all centred around a strange green orb, the Loc-nar, that gets taken to earth by an astronaut from the space shuttle in what is pretty much a vintage Corvette version of Elon Musk’s car. In the next little section, the astronaut arrives at home, where he is greeted by his daughter. He says he has something to show her and opens his case letting the Loc-nar out, which promptly melts him, Raiders of the Lost Ark style. It then introduces itself to the terrified girl as "the sum of all evils" and shows her parallel universes, (other space-times?) where it exists.

My favourite of the shorts is a dystopian New York and a cab driver called Harry who talks about his day in a film noir voice-over as we see him first thwart a robbery (the robber looking very much like De Niro in Taxi Driver) then rescue a girl from a gangster. She is the daughter of a scientist who has discovered the Loc-nar and knows that gangs are fighting over it. After a fun night, the girl decides to sell the Loc-nar to the gangster, who it promptly melts. The girl then pulls a gun on Harry in his cab so he disintegrates her. All in a day’s work.

Other stories see the Loc-nar as part of a fantasy planet sex ritual, at a space station court martial, in a World War 2 bomber full of zombies and instigating robot sex at the Pentagon. As you do.

There’s a lot of gratuitous, well, EVERYTHING, here. It’s heavy, not just on the metal (of which there is a lot and it’s brilliant) but on sex, nudity, violence and gore. Being animation there are no real limits to what can be aspired to and boy do they aspire. Although I really liked the animation style, being more graphic novel than cartoon-y drawing for the most part, there’s a big part of me wants to know what the film would have been like had one of the big anime places in Japan got a hold of it, rather than Canadian/American animation studios. The soundtrack though is immense. As well as the most classic of classic rock and heavy metal (Black Sabbath, Nazareth, Cheap Trick etc), there’s also an amazing orchestral score composed by Elmer Bernstein (he of the Magnificent Seven, The Great Escape, Ghostbusters and hundreds of other film scores) and played by none other than the Royal Philharmonic Orchestra. I was impressed.

There’s really too much to this film to take in with just one viewing though. The more I think about the stories, the greater the appreciation I have for the “concept albumness” of the pieces and I think, in the right (maybe altered) state of mind I could really get a lot more out of it. It’s definitely one I will revisit but whether I give the sequel, Heavy Metal 2000, a go is another story altogether.