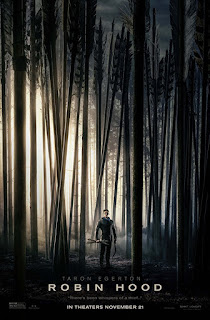 *sings* "Robin Hood, Robin Hood, riding through the gle..." what? Oh not that version? OK then.

Nope, apparently not. One hundred and ten years after the very first Robin Hood adventure hit the silver screen, this is an all new take on the hooded man myth. Aye. Right.

According to the official synopsis "Robin Hood (Taron Egerton) a war-hardened Crusader and his Moorish commander (Jamie Foxx as Little John) mount an audacious revolt against the corrupt English crown in a thrilling action-adventure packed with gritty battlefield exploits, mind-blowing fight choreography, and a timeless romance."

The film is a first feature for director Otto Bathurst, better known for his TV work on the likes of Peaky Blinders and Hustle, and stars, alongside Egerton and Foxx, Eve Hewson as Marian, Jamie Dornan as Will Scarlet and Tim Minchin as Friar Tuck with big bads Ben Mendelsohn as the Sheriff of Nottingham and Paul Anderson as Sir Guy of Gisborne.

Now, it may be just me, but don't you think the slow mo "arrow-time" (obviously the mediaeval precursor to bullet time) thing is a bit outdated now? And, anyway, we all know that the best film version of Robin Hood involved a whistling fox. Ooh de-lally!

But, watch the trailer for the new one and let us know what you think. The film hits cinemas on November 21st.