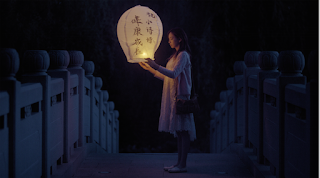 Susan Omand finds herself a bit of a fish out of water as she watches Release, a short film by Henry Liu...

Qing Ping supports her 6-year-old son as a Karaoke bar entertainer. One day, her former lover, a Chinese government official suddenly shows up and tells Qing Ping about his quick departure to the US, which leaves her with a dilemma: keep their son in China, or let him go.

I don’t often find short films difficult to review. I enjoy watching them because, like short stories, a lot of the padding is stripped away in a short film to leave you with the essence of the piece and what you make of it in your own imagination.

Unfortunately, I couldn’t really make anything of this one but I think it’s just me not connecting with the film properly rather than anything else. I’ve watched it several times now and I just don’t “get” it - or maybe I expected more than I got. That’s not to say it’s a bad film by any means, it looks very pretty and is, undoubtedly, full of symbolism – the turtle story in the taxi and the “goldfish in a bag” are likely connections that I should have made – it’s just maybe not for me. Personally, I found the characters irritating rather than engaging and I couldn’t find any empathy with the story itself, probably because I have no experience of the situation to draw on. It took me a while, even after reading the synopsis above (not something I often do with a short film, preferring to let it hook me by itself,) to work out who the people were to each other and what was going on. As a result of not being held by the story, other small niggles crept in to annoy me about the plot too and further kept me from engaging with the film – like why is the child not feeding himself at the mealtime (he was older than a toddler) and the fact that the fish are going to die being put into a lake without being acclimatised to the water. Neither point is important to the plot but that shows how much of a tangent my mind went on while trying to watch.

The thing I find most annoying though is that I feel like I’ve missed out on something that everyone else is getting. If you watch the film, you can maybe let me know what that thing is.