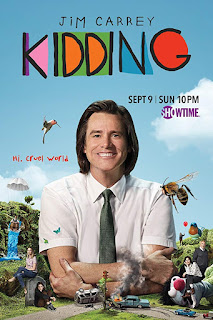 Jim Carrey is "a kind man in a cruel world" as he returns to TV in his first series regular role in over two decades in Kidding...

Jim Carrey stars as Jeff, aka Mr. Pickles, an icon of children's television, a beacon of kindness and wisdom to America's impressionable young minds, who also anchors a multi-million-dollar branding empire. But when Jeff's family begins to implode, he finds no fairy tale or fable or puppet will guide him through the crisis, which advances faster than his means to cope. The result: a kind man in a cruel world faces a slow leak of sanity as hilarious as it is heartbreaking.

“The search for identity is a theme that’s always been attractive to me,” Carrey said in a recent interview. “There’s definitely something in this piece that calls to me.”

The half-hour episode comedy series also stars Catherine Keener, Judy Greer, Justin Kirk (Weeds) and Frank Langella. It will also reunite Carrey with his Oscar-winning Eternal Sunshine of the Spotless Mind writer-director Michel Gondry, who will helm the series. The series was created by Dave Holstein (I'm Dying Up Here). Kidding premieres on Showtime in the US on 9th September so hopefully it won't be too long before it crosses the pond.

Watch a few clips in this Behind the Scenes featurette as some of the cast and creatives talk about the show: