Book – The Art of Ready Player One 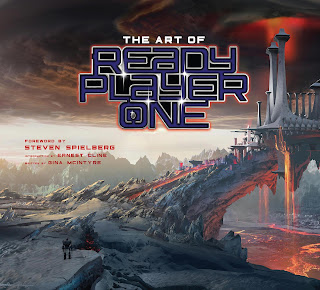 After loving the novel, and being lukewarm on the film, we try and boost Steve Taylor-Bryant’s love for the Gunter based shenanigans with an art book from our friends at Titan Books…


I was a huge fan of the Ernie Cline book. I was excited for the film, so excited in fact that I took part in ProjectRPO where we attempted to review every film mentioned in the original text, falling short by just three reviews before the Steven Spielberg film was released. I went into the film with more than a little trepidation, I wasn’t inspired by the casting, I wasn’t inspired by the comments about Spielberg wanting to remove all the pop culture references that involved his work that were the best references in the novel, and I wasn’t inspired by the fact that large sections of the film would be newly written, discarding huge swathes of the novel. I was right on all counts and didn’t enjoy the film at all. Except for how pretty it looked. It was a glorious orgy of visuals that really set the bar high in special effects for any film that follows it. I just don’t like films that are pretty and have no depth or destroy an original vision by a writer that had put his all into a story. Luckily though if you like the pretty there is ways to celebrate that beauty without having to constantly watch a film that makes you angry. Step forward Titan Books and Gina McIntyre.


The Art of Ready Player One is a joy to behold, a book chock full of all that was right in the film and discarding the elements that annoy. I know nothing of the effort that goes into a films production, I know nothing of the effort it takes to produce stunning visuals or get motion capture right. I’m quick in my reviews to point out faults mind you, but that’s the job of a critic. Reading a book like The Art of Ready Player One though is a pleasure. There really isn’t anything for me to critique. Its just a collection of beautiful images and some instructions to a grumpy git like me to shut up and look at the combined efforts of hundreds of people to bring these images to life. The way Spielberg and his team go from a sketch to a finished virtual reality avatar is quite astonishing, especially when you consider this isn’t just one avatar, there is the main five characters, the ancillary ones, the pop culture ones, and these things must move with more freedom than say a computer game avatar. The artwork printed within the pages is top notch, I mean good works of art not just characters to fill a film scene, the breakdown of scenes, including the Stanley Kubrick The Shining scene I hated in the movie, give a perspective you just don’t have going into a film viewing.

What Gina McIntyre and everyone involved in Ready Player One have accomplished with this art book is just brilliant and it’s a must own for fans of the film, fans of the original novel, fans of Spielberg, and people who just, sometimes need reminding of the sheer force of will it takes to put a film together. Message received and understood. *

*I still hate the film, this book doesn’t change the casting or the rewrites, or remove Simon Pegg from a project many levels higher than his talent deserves, but on another viewing after reading The Art of Ready Player One I can assure you that I enjoyed certain elements of it a lot more.