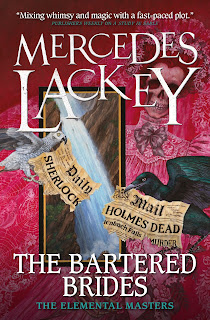 The Bartered Brides is the thirteenth novel in the magical alternate history Elemental Masters series and follows on from the last two novels in the series (A Study in Sable & A Scandal in Battersea), continuing Lackey's reimagining of Sherlock Holmes in a world where magic exists & certain Elemental Masters have control over fire, water, earth, or air in a richly-detailed fantasy Victorian England.

The threat of Moriarty is gone—but so is Sherlock Holmes. Even as they mourn the loss of their colleague, psychic Nan Killian, medium Sarah Lyon-White, and Elemental Masters John and Mary Watson must be vigilant, for members of Moriarty’s network are still at large. And their troubles are far from over: in a matter of weeks, two headless bodies of young brides wash up in major waterways. A couple who fears for their own recently-wedded daughter hires the group to investigate, but with each new body, the mystery only deepens.

The more bodies emerge, the more the gang suspects that there is dangerous magic at work, and that Moriarty’s associates are somehow involved. But as they race against the clock to uncover the killer, it will take all their talents, Magic, and Psychic Powers—and perhaps some help from a dearly departed friend—to bring the murderer to justice.

Mercedes Lackey is the New York Times bestselling American fantasy author behind the Heralds of Valdemar series, The Elemental Masters series, the 100 Kingdoms series, and many more. She has published over 100 novels in under 25 years.

The Bartered Brides is published by Titan Books on 16th October.