Book - In Her Bones 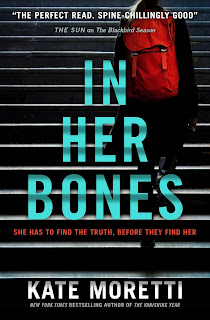 From the bestselling author of The Vanishing Year comes an explosive new thriller that follows the daughter of a serial killer. Titan Books announces the publication next month of In Her Bones by Kate Moretti...

Fifteen years ago, Lilith Wade was arrested for the brutal murder of six women. After a death row conviction and media frenzy, her thirty-year-old daughter Edie is a recovering alcoholic with a dead-end city job, just trying to survive out of the spotlight.

Edie also has a disturbing secret: a growing obsession with the families of Lilith’s victims. She’s desperate to discover how they’ve managed—or failed—to move on, and whether they’ve fared better than her. She’s been careful to keep her distance, until the day one of them is found murdered and she quickly becomes the prime suspect. Edie remembers nothing of the night of the death, and must get to the truth before the police—or the real killer—find her.

Told from multiple perspectives, In Her Bones looks at how the sins of the past often make their way into the present. A chilling portrayal of guilt and innocence told with Moretti’s signature twists and turns, this is one of the must-read crime novels of the autumn.

ABOUT THE AUTHOR: Kate Moretti is the New York Times and USA Today bestselling author of Thought I Knew You, Binds That Tie, and While You Were Gone. She worked in the pharmaceutical industry for ten years as a scientist, but now writes full time. She lives in eastern Pennsylvania with her husband and two kids.

In Her Bones is published on 2nd October