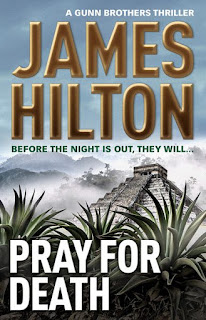 Steve Taylor-Bryant invades the jungles of Mexico as he reads Pray for Death (Gunn Brothers #3) by James Hilton from our good friends at Titan Books...

EVEN PRAYER WON’T SAVE THEM NOW

Brothers Danny and Clay Gunn were brought up an ocean apart. Both served in the military, and both know how to kill, taking work as private military contractors and freelance “fixers”.

Celine Chavez is the closest thing to a daughter that Clay Gunn has. But now she has disappeared while vacationing in Mexico. Clay and his brother Danny must venture into the ultra-violent criminal underworld to bring her home. From the bright lights of Cancún to a living nightmare in the wildest jungles of the Yucatán, the Gunn brothers face the direst of enemies yet.

One thing is for sure: if they survive, the Gunn brothers will never be the same again.

"You know, I was once so thirsty I tried Bud Light"

I put that quote from Clay Gunn at the top because this book is read at a relentless and highly violent pace but, just every so often, there is a slight moment of levity like that quote and the split second of respite it gives you as a reader stops you losing your mind. I don’t know how to explain how much I enjoyed this book without constantly using superlatives like amazing, glorious, marvellous, and any other word you’d find in a thesaurus which means brilliant. It is plotted to perfection. There is no hole I could find in the basic story, very rare nowadays, and underneath the heart stopping action there are wonderfully constructed characters and a very cinematic layout that gave me endless joy and made the hyper violence work that little bit better.

According to the author James Hilton’s biography he is well versed in Shotokan Karate and is a martial arts instructor and therefore an authority figure in kicking arse and this shows in the fight scenes in the books. There is not one hand to hand combat scenario, or gunfight, or action scene that reads like it wouldn’t be possible in real life. Some of the descriptive stuff during the inevitable body count that occurs is perhaps too graphic for readers of a nervous disposition, but I lapped up every page like a rabid animal and every scene involving one or both Gunn brothers is top notch action adventure writing.

Whilst a novel that takes two brothers, one still with his Scottish brogue, one his Texan accent from living a world apart, all the way to the wilds of the Yucatán to rescue a missing girl who isn’t even family from the clutches of a perverted, psychotic cult leader may seem implausible, the way Hilton constructs the story, adds in layers of emotional intrigue, explains about the brothers relationship, and then puts the whole lot into a mixing bowl with a dash of ex-mercenary soldiers, some South American drug lords, a woman out for revenge, and a dog that keeps appearing, it just seems to work and as you are gripped with fear and rapidly turning pages you realise you have bought the entire premise.

I’m not the biggest fan of action adventure books, mainly because fight scenes rarely work well on a page, but with James Hilton’s magical touch I honestly feel like I’ve read a good film. With its frenetic pace and highly detailed fight scenes (one towards the end with barrels of fuel and practically a tank is just amazing) it is almost impossible to not consider Pray for Death as a cinematic work. From about the fourth chapter I had Danny Gunn being played by James McAvoy and his brother Clay in my mind was Dave Bautista, and there were periods of time even within my own hectic life that I read 100 plus pages in a sitting and felt at the end like I do when I leave the cinema after a good action flick.

This is the third book in a series about the Gunn Brothers and, having not read the other two, I cannot tell you where it sits in its comparable greatness. I can however tell you that I now own books one and two, and this book I was given for review purposes will no doubt remain the best action book I have read in years. Titan as a publisher now hold three of my top five ‘Books of the Year’ slots so far with Pray for Death in the top two. Well done Mr. Hilton, well done indeed sir.

I now need a drink, though not a Bud Light.

Pray for Death is released on 16th October. Pre-order it now.