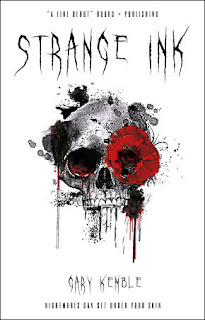 When washed-up journalist Harry Hendrick wakes with a hangover and a strange symbol tattooed on his neck, he shrugs it off as a bad night out.

But soon more tattoos appear: grisly, violent images not his own which come accompanied by visions of war-torn Afghanistan, murder, bar fights and a mysterious woman – so he begins to dig a little deeper. His search leads him to the sinister disappearance of an SAS hero and his girlfriend, whose torment is reaching back from beyond the grave.

Strange Ink’s oppressive and uneasy atmosphere provides the perfect background to the themes of war, guilt and greed that stretch throughout the book. A must-read for fans of Joe Hill, Adam Nevill and Paul Tremblay, Strange Ink never loses the reader’s attention and is sure to make your skin crawl.

Gary Kemble’s award-winning short fiction has been published in both magazines and anthologies, and his non-fiction has appeared in newspapers, magazines and online. Born in England, Gary now lives in Brisbane with his wife and kids, where he is the Social Media Co-ordinator for national news broadcaster ABC News. Strange Ink is his first novel.

Strange Ink is published on 9th of October.