Doctor Who - Asylum of the Daleks 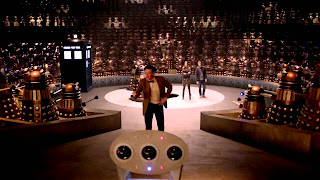 Our Doctor Who expert, Tony Cross, is journeying through all of time and space to bring us his thoughts on every available Doctor Episode. Today is the Eleventh Doctor adventure Asylum of the Daleks...

I find myself in something of a minority when it comes to Asylum of the Daleks. The first time I watched it I almost gave up on it in a fit of fan fury. It was - and remains - the only time I have ever (almost) given up on an episode of Doctor Who. And I've watched The Mutants. And The Armageddon Factor. And Time-Flight. Well, you see what I'm saying. It's unusual. I was genuinely actually quite furious.

And yet when I watched in this time I can't quite understand why I was so angry. There are still bits of it that I loathe starting with the Parliament and Prime Minister of the Daleks. I'm not going to rant here on how the whole idea of a Parliament of Daleks feels so un-Dalek as to be ludicrous. Partly because I spent a long time ranting about it at the time and have discussed all the ins and outs of the idea with fellow fans and partly because I'm aware that arguing about what a fictional race of aliens in a television series may or may not do is the way madness lies.

Oddly despite my irrational dislike of the whole Parliament of the Daleks idea I did like the idea that the Daleks have a concept of beauty that revolves around hatred. It adds a dimension to them: "Hate is beauty, beauty hate - that is a ye know on Skaro, and all ye need to know." As the Dalek Keats once wrote. I also like the throwaway line that follows that discussion that implies that the reason the Dalek's haven't killed the Doctor until now is that they find him (or the hatred of him) beautiful. It certainly explains why they talk so much about exterminating him without getting around to do it.

Then there's Rory and Amy. This story shows that they are in the process of getting divorced and it turns out that Amy threw Rory out. This turns out to revolve around the fact that Amy has discovered, since Demon's Run, that she can't have children - which is a rather dark turn to events that seems to pass unremarked. Rory has apparently always wanted children and so Amy gave him up so that he could. I'm not sure this rings true based on what we've seen of their relationship up until now. These two love each other enough with enough power to cross timelines but not enough to discuss children. Rory's a nurse. He might have some suggestions about surrogacy or adoption. Rory's not a bastard. This has been established so it just feels utterly wrong and almost a bit arbitrary.

I'm sure it is only me that feels like this. Perhaps I'm howling at the moon about consistency in character as much as my issues about the Dalek Parliament is the kind of desire for foolish consistency that is the hobgoblin of little minds.

So there's my two main gripes.

Now what this story does do rather brilliantly is surprise us with the unannounced early appearance of soon to be companion Clara Oswald or in this case Oswin Oswald.*(Jenna Coleman). It's an admirable coup de theatre. And Jenna Coleman does a brilliant job, especially when The Moff adds an impressive extra twist to the surprise of her appearance. Poor old Oswin. My one quibble is why when the Doctor and Rory are talking to Oswin her voice is human but when the Doctor speaks to her in the final scenes it isn't. It's a bit of a cheat really but not enough of one to spoil what is probably the best couple of moments in the story.

I'm not going to rant either about the silly ending in the Dalek Parliament where the newly Doctor amnesiac Daleks don't just exterminate the Doctor on sight because he's invaded their Parliament. Even if they had had one or two shots but the TAR...OK. I'll stop now.

I've got no complaints about the performances. I think Matt Smith is as brilliant as usual. Karen Gillan - who gets better with every story in my opinion - and Arthur Darvill are great too even if I don't like their plot line in this story.

It also looks great: the hundreds of Daleks, the dusty battered Daleks in the Asylum gradually waking up and the whole snowy mountain scene. I don't think Doctor Who has ever looked so good as it does at this point in its history.

But yes for me despite enjoying it much better this time around there is something unsatisfying about this story. The Doctor Who equivalent of that disappointment you get after eating something unhealthily that you really fancied but realize isn't quite what you wanted.

As I said though I get the impression that it is just me.

*Jenna Coleman's character will end up being Clara. In this story she's Oswin Oswald. I try to avoid foreknowledge spoiling stories but in this case it's tough not to.