Doctor Who - A Good Man Goes to War 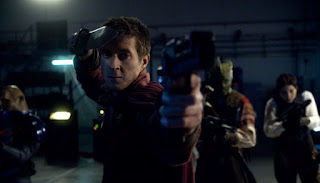 Our Doctor Who expert, Tony Cross, is journeying through all of time and space to bring us his thoughts on every available Doctor Episode. Today is the Eleventh Doctor adventure A Good Man Goes to War...

A Good Man Goes To War is the final episode of the first half of Series Six and it begins the tying up process of a number of story threads the Moff has sown throughout, although it'll still take until The Time of the Doctor to tie them all up.

Amy has given birth to Melody Pond but the Doctor's enemies have both Amy and Melody. The Doctor's enemies seem to be an alliance of the weird religious cult called 'The Headless Monks', the future Anglican Church who have gone all military (as we saw in The Time of Angels/Flesh & Stone) and headed up by the eye-patch lady, Madam Kovarian (Frances Barber), who we've seen popping in and out of various episodes of Series 6. Their motivation seems to be to grab Melody Pond and turn her into a weapon to fight the Doctor.

There's a speech given by River Song at the end of this episode which explains all this. It's a lovely speech explaining that the Doctor has terrified people. He's no longer seen as the hero but as the kind of man 'that can turn an army around at the sound of his name.' Melody Pond, having been conceived aboard the TARDIS, seems to have certain Time Lord qualities. It's these that the 'Alliance Against the Doctor' want to control. A Time Lord against a Time Lord: mutually assured destruction.

Anyway the Doctor calls in a few favours in order to get his allies together: Captain Avery, space Spitfires, Silurians, Dorium Maldovar (a very blue Simon Fisher-Becker) and the first appearance of what will become the Paternoster gang: Madam Vastra (Neve McIntosh), Jenny Flint (Catrin Stewart) and Commander Strax (Dan Starkey). River Song gets an invite but can't accept it because she already knows what's happening and when she's supposed to appear.

It all flows together quite well. The Doctor gets to be quite impressive by taking over his enemies’ base in three minutes and forty-two seconds. Unfortunately, it's all a bit easy.

In some ways this story isn't about the action at all. It's all about setting up the reveal of who River Song is and teaching the Doctor a lesson. It feels like it is going to be a tone changer for the series. Although whether Doctor Who is the kind of series that can realistically carry the darkness of a couple whose child has been stolen and then turns out to be...[Spoilers]...is a moot point. It's all very timey-wimey. Very Moff.

Pretty much everyone puts in a stonking performance here from Arthur Darvill's 'Rory the Roman' face off with the Cybermen, through Karen Gillan's Amy having a pistol pointing confrontation with River Song and most especially Matt Smith as he shows us that 'good men don't need rules'. Once more the potential darkness at the heart of the Doctor is hinted at. This is not a man to get on the wrong side of. It's one of Matt Smith's finest performances.

Dan Starkey's Strax is a wonderful change to Sontaran expectations, being forced to be a nurse in penance for some unspecified acts of Sontaran nastiness. The problem with Strax is whether this is how Sontarans will be portrayed going forward: less nasty, more comedy. We shall see.

I must admit to a love of Madam Vastra and Jenny. What's not to love about a Victorian inter-species lesbian crime-fighting duo armed with samurai swords? So, let's be less sniffy about the whole thing shall we. Neve McIntosh adds Madam Vastra to her list of Silurians. She's the Doctor's conscience a little here before River Song turns up to give his conscience the full kicking.

So by the end of this we know who River Song is. I must admit it was the least surprising of the possible surprises but there you go. Alex Kingston does her usual excellent job, although sometimes she does sound a little stilted. A bit like she's lecturing the Doctor as opposed to speaking to him but then perhaps that's the point.

Frances Barber - whose got a voice I could listen to all day - is suitably nasty as Madam Kovarian, especially good at a bit of gloating towards the end. You get the sneaky suspicion it isn't going to end well for Madam Kovarian. No one likes a smart arse. Particularly a child-thieving smart arse.

I'm not sure about 'The Headless Monks'. That seems to be one of those idea that sounds fab in theory, but you end up thinking too much about how it all works and then it starts to seem rather silly instead of creepy.

The other character I should mention is Lorna Bucket (Christina Chong) who’s in the Anglican Army because she wants to meet the Doctor. Again. He helped save her on when she was a child and she hasn't been able to forget him. She seems to be here for three reasons: to point out how special Amy is (after all the Doctor came back for Amy but not for Lorna), to give us the McGuffin that tells us who River Song is and to die bravely fighting for the Doctor so that we can be reminded of the price people pay for following the Doctor: "They're always brave." I like Christina Chong's performance. She makes Lorna enough of a real person in a few short scenes that I was genuinely upset when she was killed.

A pivotal moment in Series 6 with revelations a-go-go A Good Man Goes to War is a rather entertaining story where the action is much less important that the character development. Helped by a series of great performances from the regular cast and non-regular cast.