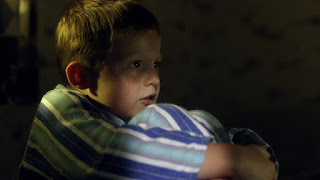 Our Doctor Who expert, Tony Cross, is journeying through all of time and space to bring us his thoughts on every available Doctor Episode. Today is the Eleventh Doctor adventure Night Terrors...

After the high and story arc heavy drama of A Good Man Goes to War and Let's Kill Hitler we have something much more domestic here in Night Terrors. A scared child and his struggling parents. Home on Earth. In a block of flats. All very Series One.

And yet, despite this being a story about a scared child, no one seems fit to mention Amy, Rory and Melody Pond. It's not quite the elephant in the room but that's a large quadruped in the building if you ask me. But this is Doctor Who. People move on.

I quite liked this at the time as the small scale domestic creepiness of the whole thing was rather effective. I still think that. This is old school Doctor Who in many respects. Oddly reminiscent to how I used to imagine The Celestial Toymaker would feel like. To me dolls have always been bloody creepy. These ones are spectacularly so.

In fact so creepy are they that someone was dressed up as one at the 50th Anniversary Doctor Who convention at Excel last year and each time I passed 'her' in the corridors - which I did one or twice - I felt mildly freaked out.

To me though this story, even though it has monsters and aliens in it, is all about the fear of not being wanted. It's George's fear of being taken away, because his parents - Alex and Claire - can't cope. He's become terrified of everything and (almost) everyone but he's most afraid of being taken away. Being Doctor Who, of course, there's more to it than that in terms of how his fear manifests itself but, in the end, this is a story where love - of a father for his child in this case - beats fear. And we forget sometimes how frightening grownups are when you’re a child. How big and loud they can be.

It's rather nice, if a little New Who twee. But then perhaps I'm just a cynical old Whovian. No, there's no perhaps about that. I AM a cynical old Whovian. In New Who, as Wet Wet Wet once said, "Love is all around." That love isn't always the romantic kind, although that's here in droves: Amy and Rory or The Doctor and River. * But what I've noticed with the Moff is that his era has a lot to say about parental love and its redeeming features. How much of that is the Moff himself and how much is his writer's personal proclivities I don't know. After all Night Terrors is a Mark Gatiss story (and I think my favourite Gatiss so far). I may come on to talk about this another time or I may abandon it as the fruitless theorizing of a man with too much time on his hands. Who knows. Who. Knows. **

It's a small cast this one and once again the regular's do a fine job. The Amy, Rory and Doctor ménage a TARDIS has grown on me as the series goes along. There's never a feeling that the TARDIS is too crowded or that one of them has too much or too little to do. It's got a certain domestic - there I am using that word again - charm about it. It's a sideways step or two from being a sitcom.

Matt Smith gets my favourite bit though. His little speech to Alex (Daniel Mays) in the kitchen about George's cry for help crossing the Universe and the fact that monsters are real. Whilst I'm mentioning Daniel Mays credit to him for doing a lovely understated job as Alex. I used to put Daniel Mays in the same box as Danny Dyer but having seen him in this and Mojo I've decided that this is an unfair comparison. There's a nice vulnerability to Mays, which I've never really noticed in Dyer. It makes him ideal casting here. There's not much I can say about Emma Cunliffe as Claire as she doesn't get much to do but what she does do she does rather well.

A little shout out (and I will never use that phrase again) for Leila Hoffman as Mrs Rossiter. A small part but nicely done.

A nice change of pace and style from the last couple of stories, which makes it a breath of fresh air and almost old school Who in its vibe means I quite enjoy this.

**I've used that The Day of the Doctor line twice now. I'll try not to use it again. But I do like it so.