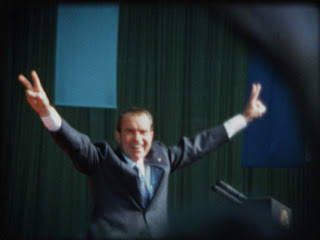 Screening as part of the Open City Documentary Festival in London this Saturday, political animal Steve Taylor-Bryant watched Our Nixon...

Throughout Richard Nixon’s presidency, three of his top White House aides obsessively documented their experiences with Super 8 home movie cameras. Young, idealistic and dedicated, they had no idea that a few years later they’d all be in prison. Following the Watergate scandal, the films remained locked up in an government safe for forty years but Penny Lane dusted them off to craft this ambitious and enthralling portrait of the Nixon presidency. Earning her a reputation as an exciting new voice in non-fiction storytelling, Lane’s debut feature is a playful and pertinent commentary on the line between privacy and politics.

I didn’t think my favourite subject, American politics of the twentieth century, could please me any more than it already has. Hundreds of books, documentary after documentary, film and television, I have consumed it all and enjoyed most of it. Nixon, along with JFK, is one of the presidents that is covered most for obvious reasons and, as fascinating as that period of time was, I genuinely thought there was very little a filmmaker could offer me I hadn’t already seen. I was wrong. Penny Lane produced an absolute joy to watch.

In the same way Hunter S. Thompson took a slightly different take on the era in Fear and Loathing on the Campaign Trail ‘72, Lane has gone about showing Nixon in a way that not many have seen before using home movies, news reports, and archive footage to tell the tumultuous story. In the very first scene Donahue is interviewing H.R. ‘Bob’ Haldeman and starts by asking “where do you begin?” This question is always the first that springs to mind when the subject matter is Richard Nixon and instead of diving into Watergate as a filmmaker, Lane has instantly hooked me by starting with those often forgotten, Nixon’s staff, his aides, those who had to be as culpable as the president himself.

Our Nixon is a superb watch, the access to archive film and home movie material is unparalleled and Lane has edited an absolute masterpiece. It’s maybe not an in-depth investigative piece but even as someone who thinks they know it all, I found myself learning, I found myself becoming emotionally involved and taking sides. Our Nixon isn’t a typical documentary, it’s art that educates.

Our Nixon (plus Q & A) is on at the Open City Documentary Festival on Saturday 8th September. For more information and to book tickets please visit the website