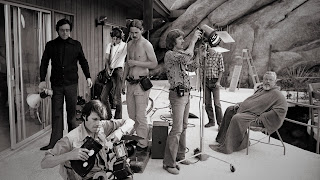 Coming to Netflix on 2nd November, watch the trailer for the new Orson Welles documentary They'll Love Me When I'm Dead...

Oscar-winning director Morgan Neville (20 Feet from Stardom) tells the provocative story of legendary director Orson Welles during the final 15 years of his life. No longer the “wonder boy” of Citizen Kane, Welles in 1970 was an artist in exile looking for his Hollywood comeback with a project called The Other Side of the Wind. For years, Welles worked on the film about an ageing film director trying to finish his last great movie. Welles shot the picture guerrilla-style in chaotic circumstances with a devoted crew of young dreamers, all the while struggling with financiers and fate.

In 1985, Welles died, leaving as his final testament the most famous unfinished film in movie history. The negative stayed in a vault for decades until now [it is also coming to Netflix on 2nd November]. With revelatory new insights from Welles collaborators including Peter Bogdanovich, Frank Marshall, Oja Kodar and daughter Beatrice Welles, They'll Love Me When I'm Dead is the untold final chapter of one of the greatest careers in film history: brilliant, innovative, defiant and unbowed.