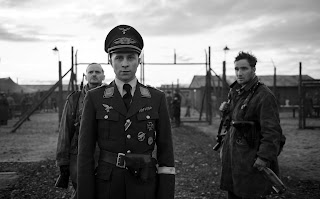 Based on true events from World War II, Steve Taylor-Bryant salutes The Captain...

1945 The Nazis have withdrawn. The hunt begins. Based on the astonishing true story of Pt. Willi Herold, a teenage deserter from the German army whose sadism would eventually earn him the nickname of the Executioner of Emsland, The Captain picks up two weeks before the end of the war. A petrified Herold, fleeing military police, finds a Nazi captain’s uniform to wear and avoid execution. Thus disguised, he soon rallies a ragtag band of brothers whose unquestioning acceptance of his command emboldens him. High on the terrifying charisma of his clothing, he invents a secret mission from the Führer and embarks on a brutal odyssey of torture and slaughter.

I am pretty sure I am going to run out of superlatives before I reach the conclusion of this review, such was the magnitude of craftsmanship I just spent 117 minutes watching. I had remembered a few stories from history lessons about World War II that were not the usual ‘big battle’ events, and growing up in West Germany, going through Checkpoint Charlie into the East, I had a bit of an insight into the time and the kind of people that were involved in the higher echelons of evil. I hadn’t however come across the story of Willi Herold before. Since the film rolled its final credits I have looked a lot deeper into a fascinating character and all I can do is stand and applaud Robert Schwentke and his cast and crew for bringing to life such an extraordinary story in such an absolutely moving and evocative manner.

Watching the film not completely aware that this is a true story? This film will still hold up as a great wartime movie. Shot beautifully in black and white, it has some powerful scenes of violence, but some very touching and dramatic moments that will stand toe to toe with any other Second World War film you have seen. Watching this film knowing it based on true events though and the real horror of abusive power and mindless murder are at the forefront of your mind and that elevates this film to a level I have never seen in similar true story war event movies. The acting, especially from Max Hubacher as Herold, is top draw. Showing Herold from separated and lonely and the beginning of the film, stealing food to survive, avoiding the military police who want to punish desertion and theft with violence through to its conclusion seeing Herold at his court martial admitting to all the deaths under his faux command, some 125 in approximately two weeks, was just stunning. Hubacher managed to show the acting strength that Herold possessed when confronted with the possibility that his secret would be uncovered, and yet showed the near insanity the man contained to be able to detach himself from his violence and make sure that anyone in his vicinity ends up as culpable as he was just a masterclass in the craft of acting by a man I truly need to see in more projects as soon as possible.

The entire cast backing up Hubacher were flawless, the story whilst very dark and psychotic, had a very poignant feel as we move into our modern world of extreme views by men and women who have the ability to fool the masses, and no scene brings home the fear I have that very little is different now to those events in 1945 than the scene that plays out as the final credits role. The military jeep driving into a city centre with Captain Herold and his Nazi cohorts stopping members of today's public to search them and force them show their identification starts off as a welcome piece of brevity after an emotionally difficult viewing, but soon builds into something that is everyday becoming far too obvious and prevalent in today's society. The one other standout scene, in a film full of stand out moments, is just after the British Air Force attack the Camp II that Herold has just committed his genocide in. After an hour or so of black and white moments to suddenly see that actual camp’s site in colour as just the field it is today really brought some overpowering feelings of sadness. Thirty seconds later we are back to black and white and the story is moving on, but your heart stays with that camp and the events for just a little while longer and to be honest that is incredibly clever film-making.

The Captain is a remarkable film that will put you through the emotional wringer. Cast and performed without fault, filmed beautifully, and so evocative in almost every scene, The Captain is by far the best film I have ever seen not in the English language, and it is right up at the top of my favourite war films list now just purely on the exhausting experience I had as a viewer. Rarely do teams of people manage to make something so perfect, but Robert Schwentke and his combined cast and crew have produced 117 minutes of actual perfection. This film has everything you want from a cinematic experience and stays with you long after the laughter has turned to tears during that closing credits scene. Bravo.