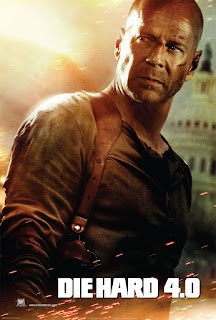 With the news of a Die Hard sequel or prequel or whatever, on its way, Steve Taylor-Bryant remembers Die Hard 4.0 because Kevin Smith lost weight. No, we don't understand how his mind works either...

I was trying to explain to my wife how funny Kevin Smith is when he’s just telling stories about his life and career, we'd been discussing how good he looks now he’s lost all the weight after his heart attack and, as you could have predicted, I fell down a YouTube rabbit hole of Kevin Smith videos.

One, in particular (the one that appeared magically above this sentence) gave me the realisation that I hadn’t watched Die Hard 4.0 for a long time. I remember really enjoying it but, since its release in 2007, the internet has decided it is a bit shit so obviously I was wrong. Or was I? You see, I am easily distracted so, instead of watching the mountain of review material I am already late getting to, I put on Die Hard 4.0 and, honestly, I have no regrets.

We all agree that the first Die Hard movie is a thing of a beauty. We all agree that Die Hard With a Vengeance is a fantastic action film, I think we're split on whether the second is any good (I’m firmly in the camp that thinks it's cheesy and not as good as we thought it was) but these films were some of the best action movies in the late 1980’s and 90’s which brings me to the first problem I have with Die Hard 4.0; its timing. I wasn’t sure that, in 2007, we as a community of fans were ready for an ageing Bruce Action Star and 12 years between Die Hard films is a long time. Maybe it had been too long? In my opinion it needed to wait a few more years. If they had made Die Hard 4.0, the tech/hacker/modern Die Hard, just a few years later the equipment that they use in it would still today seem modern enough, we had smartphones that, in look at least, haven’t really changed instead of the clunky foldable Nokia PDA. In 2007 the entirety of the world had no idea about the power of hackers, come 2010, just 3 years later, Anonymous had been on the mainstream news, some big sites had been taken down and the general public, the guys who go to action films in a cinema, could have bought into the premise of Die Hard 4.0 a little easier. It would have played as less of a conspiracy theory and more of a warning, and Bruce is still making action films so his age wouldn’t have been a barrier to waiting 3 more years.

Watching it back now the conspiracy nut element is completely gone as we sit here post-Sony hack knowing exactly what is an angry dude with a laptop is capable of. Watching it back now the other conspiracy element, Matthew Farrell’s (Justin Long) rant about how fake and corporate the news is, seems funny rather than how serious it had seemed just 10 or 11 years ago, but that doesn’t stop the enjoyment at all. This is still very much a Die Hard movie. It has John McClane in the wrong place at the wrong time and, quite frankly, Bruce Willis and Justin Long are a great comedic double act. Now I am a father of a certain age with children immersed in the tech era so I can completely relate to McClane as he struggles to understand what Matthew is constantly going on about. Men of a certain age are analogue heroes in a digital world and, since my children are all digital, I find a lot of the dialogue in Die Hard 4.0 an awful lot funnier this time around. There are obviously some believability issues in the plot as Len Wiseman directs a bigger, more action version of the McClane story. Taking out helicopters with a police car and single handedly fighting a military jet in a built-up city are probably less likely to happen than the bomb riddles we had in Vengeance, but I really don’t care, HE TOOK OUT A HELICOPTER WITH A COP CAR! I say bring on the insanity. This is a guy that, for four films now, seems to be the only guy that win against some evil dudes, THAT is the unbelievable part, the rest of it is just pudding after a good meal.

In fact, I have only one problem with Die Hard 4.0, Timothy Olyphant. I like Timothy Olyphant as a guy and an actor, in Santa Clarita Diet as a poor man's Billy Bob Thornton he is excellent, but as evil tech genius Thomas Gabriel he is found wanting in every aspect. He is slightly too good looking to play spurned geek (yes, I know that’s a massive generalisation but massive generalisations are what action movies are about,) he’s nowhere near authoritative enough to play gangster boss. His dialogue requires an Alan Rickman or a Jeremy Irons to really push the message over that this fire sale come heist is as serious as trouble can be but Olyphant’s Gabriel just seems whiny. His team of computer nerds seem well cast, the crew of military trained assassins and general trouble makers in his employ seem well picked and his Hench man/woman Mai Linh is wonderfully portrayed by an ass-kicking Maggie Q. I just needed someone better as the big baddie. In 2007 I’m sure we could have found someone with a bit more gravitas, hell even Billy Bob Thornton would have been better, but aside from the Olyphant issue Die Hard 4.0 is still incredibly enjoyable. You don’t have to think about anything as, between Matthew and Gabriel, anything that you haven’t actually lived through by now is explained for you, the action is intense and the pace rapid, the effects pretty good, the outdated tech forgivable, the casting, Olyphant aside, is pretty spot on, the story despite Smith’s tales of re-writes is pretty solid for a franchise that was probably running out of ideas, and there are worse ways to spend a couple of hours.

The internet will tell you I’m wrong, the online masses will try and discredit my thoughts, but since Die Hard 4.0 is about moody gits with laptops causing carnage, I trust you won’t believe them.