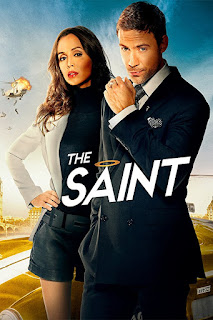 Steve Taylor-Bryant tries to switch off his mind and just enjoy something. He, well, let's say he failed and get this over with. Here are his thoughts on The Saint from 2017...

Sometimes I need to watch something but with my critic’s head switched off. Too many times I have sat down to enjoy some entertainment and have found myself analysing every camera shot, or piece of dialogue, and goodness knows how many nights I have had ruined just because I couldn’t switch off and watch something for what it is.

The Saint was supposed to be one of those times, something randomly picked on Netflix I was supposed to just sit through and enjoy for the TV movie that it is. Then something strange happened. I looked at the cast list and saw that despite Simon Templar being played by Adam Rayner (Mistresses, Notorious) there were two other Saints in it. Yes, Roger Moore, the original Simon Templar from the 1960’s makes an appearance, possibly one of his last appearances before his sad passing, and my Simon Templar, the one I watched as a child and wished I could be, Ian Ogilvy, was also in it as the baddie named The Fixer. We were just Val Kilmer away from a full house of Saints (I will go down with the ship named ‘Val Kilmer’s Saint was not as bad as you think it is’).

By the time I had finished reminiscing about my wonderful childhood sitting in front of the television, with my mum and dad telling me it was better in their day (I have watched a lot of Moore’s Templar and I am still of the opinion that Ogilvy is the best), I was half way through the film and found myself marvelling at how much I was loving the cheese. Rayner played Simon Templar with just the right amount of hammingness [It is a word – Ed] and the always beautiful and highly watchable Eliza Dushku, here playing the tech savvy Patricia Holm, was just a level above eye candy and nearly believable as a partner/teammate/whatever she was. Ogilvy seemed to relish the chance to overplay the evil villain and, at times, it was like sitting through a wonderful pantomime ["ohhhh no it wasn't!" - Ed]. I only really remember Ogilvy from his role as Simon Templar so to see him on the other side was a joy.

So, from a critic’s point of view, this was a television pilot that wasn’t picked up five years before it got a release as a movie. The reshoots to extend its run time, filmed in that period when it was in development hell, didn’t help the pacing or continuity. There were some okay-ish performances from the ancillary cast, Sammi Hanratty, James Remar and Greg Gunberg, but the script from Jesse Alexander and Tony Giglio had the hallmarks of daytime TV and is most definitely not the best thing either of them will write. Director Ernie Barbarash seems to have done his best to make a cinematic action film on a small television budget but the casting is woeful, the performances as far away from award winning as you will get, and I am sure everyone involved in The Saint wishes to move on.

However, from the point of view of someone who just sat there with their mind switched off, this film is an orgy of cheesy clichés that are endlessly entertaining, with no plot to follow, no detail to get bogged down in, and the kind of overacting that should have maybe gone out with 1980’s. But, it evoked childhood memories, it gave me a sort of warm hug and let me feel loved without having to explain why. Most of all though, it allowed me to be right about Val Kilmer’s version of The Saint, that Kilmer’s film was as good as you could do with Leslie Charteris’ characters. We all have great memories of The Saint from years ago, those of a certain age will be in the Moore camp, those of my generation will love Ian Ogilvy, but if we’re honest with ourselves none of us will pretend that The Saint could have been a ‘serious’ show or film. You couldn’t take The Saint and do with it what Tom Cruise did with Mission Impossible because that was an incredible fluke based on a slightly better show that, without Cruise, would have been this kind of cheesy cesspool. Cruise’s magnetic personality lifted that first film beyond what it deserved, and the following films took a different path and became this behemoth franchise. I will bet nobody except Cruise saw that coming, and The Saint is not the kind of show you could cast now and get anywhere near as right.

So, let’s be fair and say this wasn’t a great film but that’s okay.  2017’s The Saint is only worth watching for the memories it will bring back to you and for anyone who wants a lesson in playing a pantomime villain from Ian Ogilvy. It is not written well, acted well, constructed well, or anything else you can think of well. It was, however, a lovely 91 minutes of head cleansing.