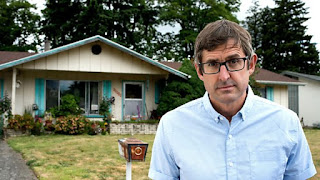 Changing social attitudes and radical new laws have transformed how Americans can experience some of life’s most intimate moments - how we raise children, how we love and even how we die. Twenty years since Louis first hit our screens with his pioneering series Louis Theroux’s Weird Weekends, the award-winning documentary-maker is back with three gripping new films.

The first is Take My Baby. Louis heads to California, the US adoption capital, where the majority of new-born adoptions are carried out privately in what is now a multi-million dollar industry. Agencies, facilitators and lawyers can earn thousands of dollars per baby by matching pregnant women prepared to give up their newborns with adoptive parents willing to pay up to $50,000 for the privilege. Louis spends time with the birth mothers preparing to hand over their own flesh and blood, uncovering the stories of poverty, addiction and abuse that can push these women into making such a heartbreaking decision. He also meets the adoptive families paying out huge amounts of money in the hope of being able to raise a child they can’t have by natural means. But in a system open to abuse, whether the birth mother actually hands over the baby hangs in the balance until after the birth.

Next we have Maximum Love. For hundreds of years, romantic relationships in Western society have been based on the idea of monogamy: two people, together, forever. But with nearly half of all US marriages ending in divorce, perhaps the traditional model is no longer fit for purpose. Louis travels to Portland, Oregon, the heart of a movement seeking to re-write the rule book on how we conduct intimate relationships and experience family life. Portland, whose city motto is Keep Portland Weird, is seen as the US capital of polyamory and ethical non-monogamy, the practice of openly and transparently having multiple relationships that go further than just sex. He embeds himself with families who have made the bold decision to open up their relationships in a number of different ways; whether inviting others into existing relationships or allowing partners to seek romance elsewhere. He discovers that for many, more partners means more love and more happiness. But for others, multiple relationships have led to jealousy, upset and broken hearts.

Finally there is Choosing Death. In the US, there are now six states that offer the terminally ill the option of ending their lives with a prescribed cocktail of drugs. Louis heads back to California, one of the latest states to adopt this law, where residents can now take home a lethal overdose as long as they are terminally ill, of sound mind and strong enough to administer their own prescribed dose. Here, he is invited into the family homes of those who want control over ending their own lives. But he discovers that when you have complete autonomy over your own death, choosing the right time is not such a simple decision. He also meets a group who provide information about how to die to those who don’t fit the legal criteria. With them, he meets a woman planning to end her life long before what would appear to be her natural time, raising complex moral and legal questions about how much control we should have over our own deaths.

Louis Theroux says: “I have always been interested in how people conduct the most intimate aspects of their lives. For this series we looked at the new ways Americans are approaching some of humanity’s oldest dilemmas: pregnant mums who feel unequipped to keep their babies and so pick new parents for them; the world of polyamory aka 'ethical non-monogamy'; and people with debilitating conditions who opt to hasten their own deaths.

"All of these stories have something a touch utopian about them, involving a kind of idealism and forward thinking that brings new opportunities but also new risks. I have been given extraordinary levels of access to courageous people and families across the United States, many of them enduring unbelievable levels of stress and anguish, and it was a privilege to be allowed into their lives in this most personal way.”

Louis Theroux’s Altered States was commissioned by Patrick Holland, Controller, BBC Two and Clare Sillery, Head of Commissioning, Documentaries. The films are made by The Documentary Unit, BBC Studios. The Executive Producer is Peter Dale and the Series Producer is Arron Fellows.