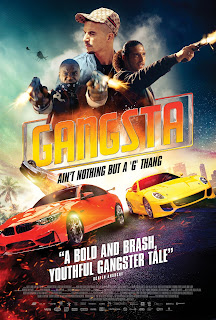 Coming to digital on 19th and DVD on 29th, Steve Taylor-Bryant digs out his Burberry baseball cap to watch Gangsta...

“Antwerp. The lives of four dealer friends, who want to become real-life swaggers, spins out of control when they steal a shipment of cocaine. They trigger a full out war between them, an Amsterdam drug lord and the ruthless Colombian cartels.”

Ha! This film was so enjoyable, nowhere near perfect by any stretch of the imagination, but it was stylish, beautiful, and completely batshit crazy. I didn’t know a lot about the Moroccan influenced aspect of life in Belgium, I didn’t know a great deal about the drug infused life in Antwerp, and if it wasn’t for knowing that about three quarters of the story was based on real life events, I wouldn’t have believed this film had any basis in realism, but my word it was a blast to watch. It had all the hallmarks of a directing duo destined for Hollywood and if Adil El Arbi and Bilall Fallah really are taking on the next instalment of the Bad Boys franchise then colour me intrigued because Gangsta was everything you would expect from these kind of action films.

It was hilariously funny, subtle name calling or comments about Fed Ex led me to comparisons with Wolf of Wall Street, and if you took Scorsese’s classic tale of debauchery and made more urban then you would not be far off what Gangsta is. It has so much going on, and I will admit to losing myself on occasion trying to follow the subtitles with tears of laughter in my eyes, that it can be hard to maybe see below the surface. Now I am not sure I am the man to look for deeper more nuanced elements to the story that others may pick up, but as a riot on the senses there are not many better films out there. It seems to be perfectly cast, although my knowledge of Belgian actors is somewhat wanting, and everyone involved on the screen brings something that interests, that sparks something in the viewer.

Gangsta was a refreshing, funny, and intriguing take on a tale of drugs and their cause and effect. The directing duo, along with Robrecht Heyvaert as cinematographer, have a beautiful way of putting on a show. The neon drug fuelled story of life in Belgium is a spectacle and the parts I understood, which to be fair was about ninety percent of it, were highly entertaining. If this is their audition tape for Hollywood, then I would hire these guys and let them get to work. Outstanding and enjoyable, I like the unadulterated brashness of the entire project. Inspired filmmaking that pulls no punches and is insanely funny. Sounds like what you want from the Bad Boys franchise doesn’t it?