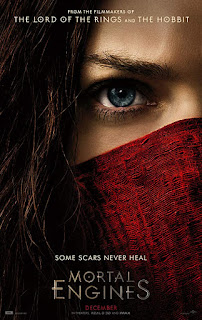 Find out more about Mortal Engines...

Hundreds of years after civilization was destroyed by a cataclysmic event, a mysterious young woman, Hester Shaw (Hera Hilmar), emerges as the only one who can stop London — now a giant, predator city on wheels — from devouring everything in its path. Feral, and fiercely driven by the memory of her mother, Hester joins forces with Tom Natsworthy (Robert Sheehan), an outcast from London, along with Anna Fang (Jihae), a dangerous outlaw with a bounty on her head.

Mortal Engines hits cinemas on 8th December. Watch the new trailer then find out more about some of the behind the scenes creatives below.


Now that you've watched the trailer, meet the concept artist behind Mortal Engines.


To be a good costume designer you have to step into a world, believe in it and create something that feels lived-in. Join three artists practising a craft handed down through generations, as they bring the costumes of Mortal Engines to life.


Making something exist out of nothing is a little bit like magic. Meet the prop-makers who have filled the world of Mortal Engines with wondrous items that must be seen to be believed.

It’s exciting to visualize something small and then make it larger than life. Meet a creative who has fostered her childhood imagination to become a textile artist on Mortal Engines.