Audio - Night of the Orchid 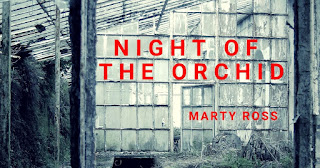 Susan Omand listened to the audiodrama Night of the Orchid by Marty Ross, thanks to the Wireless Theatre Company...

Madeleine Loughran has fled her wedding, seeking shelter with her beloved Great Aunt at her house in the snowbound Scottish countryside.

In the house’s ruined glasshouse, the blossoming of a single living flower is the first sign of a passion that will strip bare the secret history of a house and its inhabitants.

A contemporary Gothic drama of desire and death, and of love and vengeance beyond the grave.

I’ve enjoyed everything that I’ve listened to before from Wireless Theatre Company, so I was really looking forward to cosying up with a dram and a good going ghost story on a cold and wintry day. Being a feature length drama, rather than the serialisations that WTC usually come up with, this was a fairly slow burn with the intent of concentrating more on character and atmosphere building rather than jumping straight in to the action and adventure. It had all the elements of a Gothic tale though, with supernatural elements, a rambling manor house and, yes, a damsel in diaphanous nightwear, however this is no Victorian melodrama, it is bang up to date and, for me, that choice didn’t sit well. I think I need my Gothic to be a bit more historical.

There were a few other things that didn’t quite work for me either. Firstly, the “colouring in” scene (that’s what my local radio breakfast show presenters call the act of physical intimacy between consenting adults so I’m going to go with it). It’s always difficult to get long kissing sessions to sound right on an audiodrama and, unfortunately, this time the snogging sounded more like somebody chewing a particularly sticky toffee, which was more than slightly off-putting, and as for the colouring in itself, well, shall we just say what it lacked in passion it made up for in noise. And it lacked a lot of passion, probably because of the stilted lead up to it as there was very little chemistry between Paul and Madeleine as she doesn’t react to Paul’s seduction with any emotion at all. Which leads me neatly on to the central character of Madeleine. Now this is nothing against the actor, Rebecca Hamilton, as she did her best with what she was given but Madeleine's character, her demeanour and backstory, was all over the place, being handed too many twisted traits at once, and so lacking in any consistency that it made it very difficult for me to build any kind of empathy for her. That inconsistency was evident in other areas of the writing too, leaving me wrestling with a few obvious plotholes, leaps of faith and unanswered questions, but it wasn’t all bad.

I really enjoyed the initial concept of the story and the setting of the glasshouse which bloomed back into life as the story progressed made a strong mental picture. For a ghost story too it was high on the gore factor and made good use of the psychological fear of the unknown. I also thought that the acting was strong, as I said above, with all the cast giving their best with the dialogue they were handed. Special mention must go to Peter Hannah who brought an irresistible magnetic charm to the ghostly Paul.

Overall, then, I’d say that, this time, Night of the Orchid just wasn’t my thing mainly because, like I said at the beginning, I started off on the wrong foot with it being a modern setting for a Gothic tale but, if you’re ok with that and can forgive the slight flaws, give it a go.