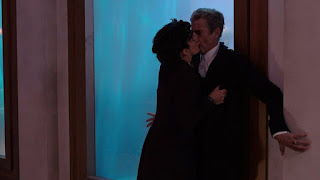 Our Doctor Who expert, Tony Cross, is journeying through all of time and space to bring us his thoughts on every available Doctor Episode. Today is the Twelfth Doctor adventures Dark Water & Death in Heaven...

So, the first Capaldi season comes to an end. We get to find out who Missy is, which didn't turn out to be a huge surprise. We get an explanation for all the little scenes Missy has with the dead. We get to discover that Missy put the Doctor and Clara together but I'm not entirely sure why. We get to see the Cybermen's role twist from the ultimate survivors to electronic Zombies. It's the Walking Dead with circuits.

Oh, and the whole soldier thing comes to an end with the fate of Danny Pink and the Doctor's salute. Death in Heaven was broadcast on Remembrance Weekend in the UK and I did wonder whether the soldier theme of this series was built in because Steven Moffat knew that, which might be giving him too much credit. But if not, it seems like a nice coincidence. Danny is a living illustration of the truth expressed a long time ago by the Earl of Leicester in The Crusade that: '...when you men of eloquence have stunned each other with your words, we, we the soldiers, have to face out. On some half-started morning, while you speakers lie abed, armies settle everything, giving sweat, sinewed bodies, aye, and life itself.'

Leicester was wrong about the Doctor then and Danny is wrong about the Doctor now. Quite why Steven Moffat feels the need to break down the Doctor's character quite so much I don't know. It obviously seems to be part of Missy's plan, which is to present the Doctor with an army with which he can take over the Universe in the name of good, but this seems to be the classic Christmas present purchasing mistake of Dads the world over: buying something for your child that is really for you. I mean why would the Doctor want an army? As soon as he took control of it he would no longer be the Doctor anymore. Missy, on the other hand, would love an army. She's missed the point. Whatever kind of friendship they once had they can never have again. Or perhaps they can but it would need Missy to change not the Doctor. And that's not going to happen, is it?

Anyway, let me rewind a bit.

This story begins with [SPOILERS] the death of Danny Pink. It is followed up with Clara's grief-stricken reaction to Danny's death. She goes off the rails, frankly. It becomes all about her and her grief. But then perhaps that is what grief does to people. She tries to force the Doctor into finding Danny 'wherever he is'. There's a lot of emotion in this. The Doctor though refuses to be blackmailed (and/or sees through Clara's plot*). He does, however, agree to help her despite her actions. That little speech that ends with 'Do you think I care for you so little that betraying me would make a difference?' is bloody fantastic.

The next thing we know we're inside an odd-looking building with skeletons sitting in chairs, Missy popping up to snog the Doctor and drop hints about who she is and Dr Chang (Andrew Leung). Meanwhile, Danny is being introduced to the afterlife by Seb (a rather delightful Chris Addison). The stories run in parallel building towards the revelation of a) Cybermen and b) who Missy is. It's all done reasonably well, although I was slightly surprised that they got away with the cremation stuff, even allowing for the warnings etc.

And then we're into the hour-long final episode Death in Heaven, which frankly I can't stand. 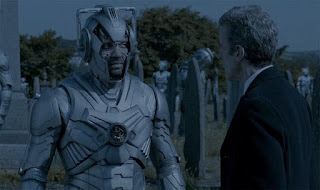 Yes, we get to see UNIT again, which is nice. But really this is an exercise in giving the Doctor and Clara a good emotional kicking - and us - for the sake of one small speech about being an idiot. Missy being barking mad seems to be the excuse for all this death and destruction. The theory is she's somehow been taking the 'souls' of human beings since forever and tucking them away in a piece of Time Lord technology so that she can drop the - emotionally cleansed - 'souls' in Cyber bodies to build an army. And that no one noticed.

But let's not dwell on that. Missy has a history of insane plans that fall apart at the end, although here she comes close to winning.

However, love saves the day again as CyberDanny refuses to be a Cyberman, gives a lovely speech about the promise of a soldier and then kills himself and all the other Cybermen to bring an end to the Cyber rain. Love. Love will tear us apart.

Oh, and then the CyberBrigadier turns up. Now, nothing makes me happier than seeing a character we fondly remember played by an actor who had recently died made into a zombie. Even if that zombie can hold off its Cyber conditioning and do the right thing. Hey, the salute is nice. But hey, let's not.

I don't know why entirely but Death in Heaven really pisses me off. It's bleak. No one seriously believes Missy is dead at the end. No one seriously believes anyone is dead as Steven Moffat proves himself unable to kill anyone. So, it makes a story predicated on grief seem lacking in emotional heft. It's a lesson I think he learned and which I will talk about again later.

The end of this story - before Nick Frost appears - is genuinely bleak. I don't think Doctor Who should be this bleak. I don't think the Doctor should be hammered into the ground like that. Doctor Who is one of the few sources of optimism and positivity on television. I've said before that I liked the idea of 'dark Doctor Who' but the truth is 'dark Doctor Who' wouldn't be Doctor Who. The Doctor saves people. She doesn't save everyone and sometimes he doesn't save the best people.**

I'm not saying there shouldn't be loss and death in the Doctor Who universe. Death is everywhere in it: explicit and implicit but the Doctor is there to remind us that, as Gandhi said, that however bleak it looks and however strong the bad guys look they always lose. That 'You must not lose faith in Humanity. Humanity is an ocean; if a few drops of the ocean are dirty, the ocean does not become dirty.' That's what the Doctor should stand for.

Perhaps, once again, I am taking this too seriously. Perhaps I have missed the point.

Whatever, I just don't like it. That isn't to say there aren't some good things in here. Capaldi is superb. Again. So is Jenna Coleman. Michelle Gomez does a fine job as Missy giving her a nice touch of both the Simm insanity and the Delgado wit. She's one of the highlights of the programme. It's nice to see Jemma Redgrave as Kate Stewart and Ingrid Oliver as Osgood. They've both settled into their parts.

Next up: Last Christmas.

*Which also seems to fall on the fact that the Doctor can open the TARDIS door with a click of his fingers these days. He doesn't NEED a key.

**And don't get me started on this recent thing that the Doctor only takes the best people into the TARDIS, which is a way of making everyone feel better about being a Doctor Who fan. The Doctor doesn't take the best people. He takes ordinary people and lets them find their best.