Documentary - Back to Berlin 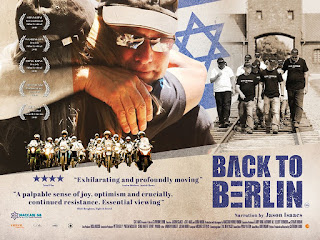 Out on DVD now, Tony Cross watched the documentary Back to Berlin...

Back to Berlin is a documentary that uses the story of a group of Jewish motorcyclists who, in the 1930s travelled through Europe to find athletes for the Maccabi Games, to tell the story of the Holocaust.

It recreates the ride, starting in Israel, with the children and grandchildren of survivors (and survivors themselves.) It allows the modern riders to tell their stories stopping off in Greece, Bulgaria, Hungary, Poland, Romania and Germany. We visit places with names that should be familiar to us all: Lodz, Auschwitz-Birkenau, Warsaw amongst others but there are new names to add such as Jilava Fort 13 Penitentiary in Romania.

This journey allows us to see how the tentacles of Nazi Germany’s murderous anti-Semitism reached across Europe. We often forget these places in the British version of World War Two. Back to Berlin does an excellent job of reminding us. It also hammers home the fact that it wasn’t just the Germans who were responsible for the mass murder of Jews. Fascists with different names in different countries all contributed.

The film manages to give several the bikers the chance to tell their families stories as each site they visit has a meaning for each different biker. 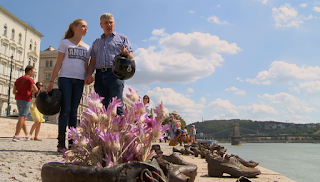 December 1944 to January 1945 the Hungarian Arrow Cross take c.20,000 Jews of Budapest down to the banks of the river. They make them take off their shoes. Then they shoot them, throwing their bodies into the river.

The director, Catherine Lurie, allows the story to tell itself without too much editorial messing about and Jason Isaacs' narration is perfect. He’s not too much of a presence and the narration never overwhelms the stories of the bikers themselves.

Lurie also weaves in contemporary Europe’s struggle to deal with immigration. There’s a section where the bikers watch Syrian refugees meeting the fences and force of the Serbian border, which links to footage of post-war Jewish refugees fleeing Europe being put into camps in Cyprus by the British. There’s some American newsreel footage of those camps, which isn’t something that makes this Brit feel particularly comfortable.

It’s a strong film. It’s a timely film. I have sown statistics throughout this review. Statistics that illustrate the terrible crime that the Holocaust was. As if I need to tell you that. Except perhaps I do. Anti-Semitism hasn’t gone away. Holocaust denial is still a thing despite it being the one great crime against humanity that has a fantastic paper trail, a whole set of accounts by the people responsible for carrying out the crimes, photographs and film. But what do these statistics achieve? Stalin once, allegedly, said, “The death of one man is a tragedy, the death of millions is a statistic.” It’s hard for us to grapple with these numbers and what Back to Berlin does is give us the stories of that one man, that one woman. All these individual stories that are told separately to make the bigger story. What impact does a statistic have against seeing a man, Danny Marom, hold his weeping father, Yoram, who survived the Holocaust? Or hearing Yoram, who was a child of six, talking about what he still sees and what he still hears. Every day.

We need more films like Back to Berlin. We need to keep telling the stories of the survivors.

Towards the end of the film we hear a poem by Elie Wiesel that talks about remembering so that we prevent those who were murdered from ‘dying again in oblivion.’ We’ve been glibly talking about never letting the Holocaust happen again for decades whilst allowing mass murder. We still saying never again now whilst letting populists sow the seeds of future Holocausts. We see intelligent people using anti-Semitic tropes to bolster their case.

If we really mean it about never again, we must tell the stories of those who died and those who survived. We must bear witness as the living witnesses dwindle in number and disappear. Films like Back to Berlin are going to be key to that.