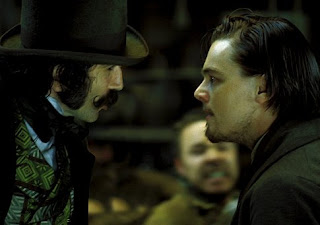 Many film projects or books that try and show the birth of a democracy, or the building of a country focus on the government halls where men in powdered wigs gorge themselves on power as they write the laws that will benefit only them. I love films like that, don’t get me wrong, but sometimes I am left wondering what happens to us little folk in all this change? And it's this element of the story that is the main focus of Gangs of New York, however intentional or not.

This is the story of communities that don’t like change, of families that fear those they do not know, and how people can fill their coffers on power, and it is shown in the most epic and glorious way by a film director that always pushes the boundaries of a story. Martin Scorsese is a genius film director, a man of vision that very rarely fails to achieve the astonishing and, in Gangs of New York, he has created a masterpiece of cinema, an epic that harks back to the early days of cinema, and the kind of film that studios just don’t make anymore. Like most great art it has its flaws within its majesty and, if stories of the behind the scenes issues are to be believed, any fault you find seems to fall at the floor of Harvey Weinstein as he tried to get Scorsese to bring the films runtime down from its near three and a half hours, those couple of continuity issues that appear because of producers meddling though are small and almost pale into insignificance when shown against the epic scale of the rest of the production.

Gangs of New York begins sixteen years before the rest of the main story takes place and sees the Irish Catholic immigrants, under the leadership of their Priest Vallon (Liam Neeson), preparing for battle in the tunnels they have carved below Manhattan. They rise from the church above and out into the Five Points to face off with the American Nativists who are controlled by the radical hater of the Pope, William ‘Bill the Butcher’ Cutting (Daniel Day-Lewis). A huge battle ensues which sees Bill take the life of Vallon in front of his young son. Sixteen years after the death of his father Amsterdam (Leonardo DiCaprio) leaves the boarding school and comes out into New York to find his fathers killer and seek revenge. He ingratiates himself with Bill who takes him under his wing and treats him like a surrogate son, right up to the point when Amsterdam tries, but fails to kill him. An injured Amsterdam returns to the church and tunnels of his childhood and rebuilds his fathers’ gang, The Dead Rabbits, in preparation for a final showdown with Bill the Butcher.

The entire story of Amsterdam and Bill is an important one and in any context or time would have made an interesting film project but when you tell it against the backdrop of the American Civil War, the end of slavery, and forced conscription you get a level of history and intrigue that just adds layer upon layer of epic viewing on top of an already great concept. The entire film, because of all its elements, is so grand in scale and in the massive sets there is a beauty that rises from the poverty and bloodshed on the streets. The eye is busy, for sure, having to take in everything that there is to see but so rarely does that happen in modern cinema it is a blessing. But when a film is so epic in scale, so very grand in its sets and so beautifully shot, it still rises and falls on its performances. No such problem with Gangs of New York though which has two leads at the very top of their game. In DiCaprio you have a brooding intensity that oozes off the screen and this is the performance that cemented him as a modern day great for me. I had loved him in Gilbert Grape and Basketball Diaries but under the tutelage of the master director DiCaprio just raised his performance to an extraordinary level. There are not many actors that can go toe to toe with Daniel Day-Lewis on his best day and come out unscathed, DiCaprio manages the almost impossible. It's Day-Lewis though that once again produces an award worthy performance as Bill the Butcher. I don’t know how much stock I put in the method acting thingamajig, mainly because I am not an actor and so I don’t understand how character-building works, but whatever it is that Daniel Day-Lewis does, my word, it works. He is an extraordinary star that I am lucky to have witnessed in my lifetime that as Bill adds menace that many could have pulled off. Yes, he’s fantastic during the violent scenes, and believable during the angry scenes, but its in the quietness and the calm that his true menace manifests and I get goosebumps watching a master work.

There is nothing I dislike about Gangs of New York. I love the near three-hour runtime, I love the epic sets, I love the historical elements that tell an interesting, if not morally corrupt, vision of the past, and the casting is some of the best that has ever graced my television screen.