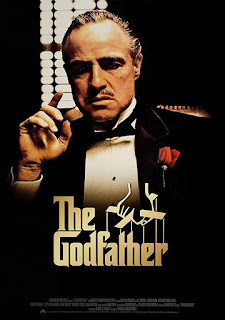 Kraig Taylor-Bryant is going to make you an offer you can't refuse as he looks at the themes in The Godfather (with some spoilers)...

In an effort to relive the classics of film making, I decided to dig out one of the more famous ones, The Godfather. What I found to be most prominent about this film, was its theme about corruption, and how power leads to it, alongside the effects that death can have on a person, especially one associated with any gang or crime organisation. I think the character of Michael Corleone (played by Al Pacino) is the best example for my views on this, his portrayal of a “hero” that his father was proud of, becoming a villain, to be feared throughout the country as well as their own home.

The film very cleverly allows us to familiarise ourselves with the world they live in, it introduces us to the good and the bad of the crime families, the good being how close the bond between them all is, but also showing the great lengths the family would go to, to protect their own, or give one of their own what they want. From the start of the film, we get to witness how the Godfather, Don Vito Corleone, (Marlon Brando) manages to bring people into his family, by promising safety and protection for the family of one man, whose daughter was recently beaten by her boyfriend and her boyfriend’s friend simply for not wanting to do the things they did. Though it was through dark intentions that the father of this daughter joined the family, and made a commitment to them, their bond with each of the family was shown to be strong, when Vito Corleone promises this man that his family will be protected and have their “justice”.

We continue to see contrasting between Vito Corleone’s daughter’s wedding, with some darker conversations, such as the one with Johnny Fontane (Al Martino), a famous singer that was stuck in a deal with a bandleader’s contract, and we find out about how Vito helped him to get out of the contract by threatening the bandleader, which again contrasts the good and the bad, by showing the good intentions, but with their violent actions. The conversation was about how Johnny wants to get an acting role because he believes that his voice isn’t how it used to be, and he could be ruined if he doesn’t get his name out there again, so again, the film establishes the bonds of a crime family, when Vito threatens a director, and proceeds to scare him by planting a horse’s head in his bed, to show the lengths they will go to, to protect one of their own.

As the film goes on and events progress, we see the Corleones as the kinder out of the other families, when Vito Corleone refuses to make deals involving drugs, because he sees it as a dangerous business, which turns out to be quite ironic, when Vito Corleone gets shot when going out to buy fruit, after refusing a deal with a drug businessman, Virgil Sollozzo, (Al Lettieri) who orders the “hit”. 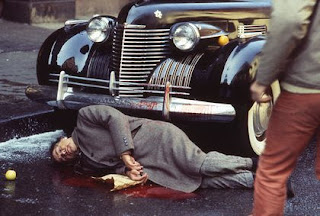 After Vito Corleone gets shot, Sonny, his oldest son (James Caan) takes over temporary control over the Corleone family as the godfather, briefly, with Michael beginning to get mixed up more in the family business, though with the intention on getting revenge on whoever ordered the hit on his father. What’s interesting about this is when Vito is in hospital after being shot, the gang protection he has is ordered to leave by the police captain, who we later find out to be on the pay roll of one of the families, possibly Virgil Sollozzo’s, which again helps us to realise the kind of influence that gangs had over the streets at the time.

Soon after this, Michael goes forward and kills Virgil and his guard/assistant, after organising a meeting to “settle their differences”. I think it was this moment that Michael initiated himself into the crime family business officially, before going into hiding briefly, where clearly a long period of time passes, and Michael gets married to a woman who is arranged to be wedded to him, which again shows the kind of power crime families had over even women, or possibly the way women were treated in general at the time.

Over the time Michael is away a truce/peace is made by Vito, following his recovery and the recent death of his oldest son, Sonny, showing how death in his family has changed him to be a wiser person, in a desperate attempt to protect the rest of his family. During this, Michael experiences the assassination of his wife, as his own car is sabotaged, which helps to set up the kind of violent person Michael will become because of all the death he experiences. Upon his return, and finding out that his oldest brother Sonny is dead, he seeks his own happiness in a somewhat desperate attempt, by reuniting with his old lover, Kay (Diane Keaton), from many years ago, showing how death has made him somewhat desperate for family, and love in his life.

Before Vito’s passing, he gives the title of Godfather to his wisest son, Michael, who at this point is on the verge of becoming a much more violent and power-hungry crime boss than those we’ve seen throughout the film. Now the most important part of the film, the turning point for Michael, and it’s the scene where Michael, as the Godfather, goes to a casino in an attempt to buy them out to expand the families fortune and influence, though this doesn’t at all turn out the way he plans when the owner of the casino insults him and teases him about how the Corleones are finished, and are nothing compared to the other crime families. This act of humiliation, like in other historical classics (Macbeth, for example), marks a turning point for Michael because it makes him realise the only way he can gain back the respect of his family is through the death of all the other family bosses.

So in one of the end scenes of the film, it is contrasted between Michael becoming a godfather to one of the babies in the Corleone family, with the death of the other crime family bosses, which not only contrasts life and death, but it also introduces himself as the new Godfather, of the Corleone’s in general, but also almost making him like the god of the crime families, since he’s basically taken over all the gangs after killing all the other bosses. This also shows, as I mentioned before how his desire for power was ignited when his own family was called weak, and that made him see his own father as weak, and making him cause the opposite of peace because he sees this as the only way to protect his family, which we can only assume, is because of all the death he experiences throughout his life, and throughout the film.

I think the point I’m trying to make about this film is that it’s perfect in the sense that it drags out, with its staggering 2 hour and 40 minute runtime, because every minute of this film is needed to help us understand each member of the family, and the reasoning behind their intentions, even in scenes of Michael interacting with his family; it’s important to show how kind he used to be, before he decides to take over the streets as his own version of “Godfather”. I think any film nowadays needs to be as long as this one to help us grow attached to characters, and establish the world of the film, so that when that world is changed, or someone dies, we as an audience can truly feel something, and feel like we are a part of the film, which is something this magnificent piece does flawlessly.