Film - The Man Who Invented Christmas 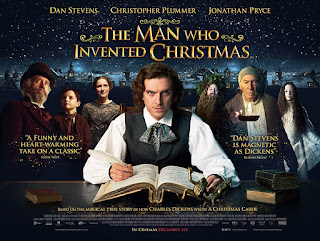 Steve Taylor-Bryant swallows the humbug as he takes on a Christmas film, kind of…

It’s not a scientifically proved theory by any means, but I do follow a school of thought that Christmas films must have some incredible darkness in them to work well. Some Christmas stuff just oozes with cheese and stinks up the place worse than my mother’s sprouts but some, like A Christmas Carol, are a joy to behold and last centuries. I firmly believe that, despite the happy ending, it is because we all quietly enjoy watching people struggle, we love that some folk don’t have or understand happiness. Or maybe it is just me, I don’t know. When it comes to A Christmas Carol though there are so many interpretations it’s hard to remember what the Dickens is going on (oh come on that was glorious!) so we return to the book quite a lot. No more reading for us though as Director Bharat Nalluri (Miss Pettigrew Lives for a Day) and screenwriter Susan Coyne (Slings and Arrows) have adapted Les Standiford’s book about Charles Dickens and his life whilst writing the epitome of Christmas stories.

In 1843, the celebrated British novelist, Charles Dickens, is at a low point in his career with three flops behind him and his family expenses piling up at home. Determined to recover, Dickens decides to write a Christmas story and self-publish it in less than two months. As Dickens labours writing on such short notice, his estranged father and mother come to bunk with him. Still haunted by painful memories of his father ruining his childhood by his financial irresponsibility, Dickens develops a writer's block which seems to have no solution. As such, Dickens must face his personal demons epitomized through his characters, especially in his imagined conversations with Ebenezer Scrooge. Now with a looming deadline, Dickens struggles for inspiration against his frustrations and his characters' opinions in a literary challenge creating a classic tale that would define the essential soul of modern Christmas.

The Man Who Invented Christmas is nearly perfect. It treads the fine lines between biopic and entertainment well and, whilst some aspects seem over fictionalised, other parts are so real it’s painful to watch. My only, and its slight, criticism is that the fact that Christmas is not really celebrated in this period of time, which is the point of the title, is only vaguely mentioned in passing and I wish it had been a little more prominent in the tale for those people that watch this film and know nothing of the time period or of Dickens upbringing. That very slight issue aside the film is a glorious orgy of all that I love from A Christmas Carol thrown into a true story with humour and class. Dickens did indeed have an awful upbringing due to his father’s debt and he was sent to work at an early age as punishment and had a contemptuous relationship with both his father and money from that day forth and it is no wonder these feelings of betrayal and pain seep into Dickens stories. Whilst in reality the writer probably had these issues and verbal battles through his characters in his head, in the film they play out with Scrooge et al surrounding him more and more as he writes against the clock to finish his story.

The visual way the film looks is perfect for a tale of woe at Christmas time and brings back the feelings I had as a child watching the George C. Scott version of Victorian London in December. The script is bright and pacey giving all characters something to say and some level of importance whether Dickens himself or a chambermaid, and the casting is spot on. Ian McNeice as the publisher who doesn’t want a Christmas book, which leads to Dickens going the self-published route, Miles Jupp as Thackerey, the critic who torments Charles with his opinions, and Miriam Margolyes as Mrs. Fisk the housekeeper are all highly watchable and this isn’t even the main cast yet. Jonathan Pryce instantly makes a project better with his involvement and as John Dickens, Charles' errant father, he lets loose the entertainer in a way usually reserved for a Gilliam film. If it wasn’t for how good Dan Stevens was as Charles, Pryce would have stolen the entire film. When it comes to Dickens' characters coming to life around him, fantastically helping him structure the story as he writes, there is no more important character than Scrooge, but when a character is so well known and beloved it is hard to imagine doing anything new with him and being able to find an actor that could add something special to a character that has been so well played over the years. Enter Christopher Plummer, an actor of true gravitas that seems to be resurgent in his later years, playing Scrooge as you would expect him to be played but better, more believable, leaving an audience confused by their feelings for him. Plummer was utterly marvellous, and worth the price of the DVD alone but even he is upstaged by an incredible performance from Dan Stevens.

Stevens is one of those actors that should be maybe bigger than he is, I mean in levels of success and perhaps celebrity. He was pretty good in Downton Abbey so I am told and I remember him from The Fifth Estate and as Lancelot in one of the Night at the Museum films, and at one point I even had him on my shortlist to be cast as Bond, but I sort of lost track of him as he bounced from project to project without ever really lighting up the screen. No such worries here though as he is mesmerising as Charles Dickens. Every facet of emotion that Dickens goes through is perfectly portrayed by Stevens. He has the sadness of a boy who looked up to his father but whose hopes of happiness were dashed. He plays distrustful so well, especially when it is his own mind he doesn’t want to believe. He plays love, and happiness, and excitement like a child on Christmas morning, but darkness and depression like a man broken, and he does most of his exceptional acting with his facial expressions, a hard task for any actor. Stevens is Charles Dickens, or at least the version of Dickens that I most recognise. He is both Scrooge and Tiny Tim in equal measure and I really wish The Man Who Invented Christmas had received better marketing, or a bigger word of mouth campaign because I am sitting here a year after its release having found it by accident in a supermarket discount DVD section. I somehow feel the film deserves more than that.