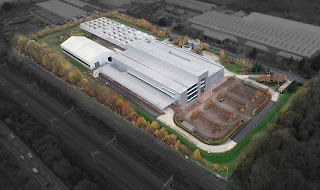 Rebellion, one of Europe’s leading media companies, has bought a $100m, 220,000 sq ft facility to convert into a film studio near to its Oxford headquarters...

The new studio, located on the site of an old printing press, is just outside of the city of Oxford - a city steeped in cultural history and which has already served as the backdrop to Hollywood blockbusters, including the Harry Potter franchise. With multiple sound stages, the largest reaching 25,000 sq ft in size, the new facilities can accommodate productions from TV drama to large scale Hollywood productions.

The new space will house Rebellion’s forthcoming productions of the Judge Dredd TV sci-fi drama Mega-City One and the future-war feature Rogue Trooper, set to be directed by Duncan Jones, who also directed Moon and Source Code. The scale of the new site means Rebellion will also make sound stage and full production/post-production office space available to rent to the UK’s growing production sector. This will help increase the levels of inward investment into UK feature film production, which registered a 162% increase in 2017.

Stuart Fenegan, producer on Moon, Source Code, Warcraft: The Beginning, Mute, and the forthcoming Rogue Trooper said: “World class UK crews and Tax Credit mean studio availability has been scarce in recent years. Jason, Chris and the Rebellion team establishing another major UK studio is huge. Thrilled for them and at the prospect of being able to shoot Rogue Trooper on truly home turf.”

Rebellion is now the UK’s leading independent games developer and publisher and a prime mover of the resurrection of the UK comic book industry. As well as being one of Europe's top independent game developers and publishers, with best selling franchises such as Sniper Elite and Zombie Army, it is a major publisher of books and comic books, as well as the custodian of the world’s largest catalogue of English language comic book IP, thanks to the acquisition of the comics and fiction assets of the British publishing titan, formerly known as IPC.

Through its Audiomotion subsidiary, Rebellion has been closely involved in the production of feature films, TV and adverts for over 15 years, contributing to US and UK tent-pole productions as diverse as World War Z, A Monster Calls, Miss Peregrine's Home For Peculiar Children, Maleficent, Harry Potter and the Deathly Hallows, Iron Man 2, and The Watchmen.

Company founders and owners, CEO Jason Kingsley and CTO Chris Kingsley were producers on the 2012 feature film Dredd and announced the creation of Rebellion Productions in 2017, to develop and produce film and TV based on its comics and games IP.

Jason Kingsley said, “This studio purchase is incredibly exciting, not just for Rebellion but for the global film and television industry that is booming but in desperate need of further infrastructure to cope with the demands for new and engaging content.

“We know first-hand the creativity and talent here in the UK and this new studio will bring in projects from all over the world, offering opportunity and income to many people in the industry, as well as local companies and services. It also means there will be demand for more UK production and we can export more of our work globally.”

Chris Kingsley added, “The levels of growth in television content for streaming services, such as Netflix and Amazon, have been astronomical in recent years. The demand for ongoing original content is bigger than ever and we’re seeing more big players wanting to get in on the action. This is very exciting for the domestic and global film industries but it’s also meant that our infrastructure is under increasing pressure.

“The new studios will help relieve some of that pressure whilst also adding to the growing figures of people employed in the UK film and TV industry, which has increased by 20% in the last five years. Our creative industries are appealing to other markets for our talent and generous tax reliefs - and we must ensure we have the studio space and infrastructure to keep furthering this ongoing growth.”

This ambitious expansion by the independent company, which is already one of the UK's biggest producers of video games, comic books, books, film and TV, is set to create up to 500 new jobs across Britain's film and television industry in the coming years. Feature film production spend in the UK reached a record high of 1.9bn in 2017, with film-related industries contributing 13.2bn to the UK economy, according to research from Lambert Smith Hampton. However, the current studio infrastructure is struggling to keep up with the demand for new content from big media companies and projections show that, at the current rate of growth, the UK is in urgent need of 1.9m sq ft of additional studio space.