The Defective Inspector forges ahead and sets his sights on reviewing Gunsmith by SeaCorp Technologies...

In America there is a great debate that seems never ending, the right to bear arms. That debate will rage for generations to come but did you ever wonder who had the right to make those arms? Now YOU do. You can create guns and ammunition as long as you willing to understand how it all comes together. I mean, a gun doesn’t just plop out of a conveyor belt… Unless you are the Gunsmith! I gave this game a go during my Twitch stream and the video will be available for about a month. But if you are too late, or you prefer the written word, I have just the thing for you…

Gunsmith calls itself “Pre-Alpha” so to say it’s unfinished is an understatement. Don’t get me wrong, there is enough of a game to enjoy yourself, but when reviewing titles at this stage of development I must repeat ‘There is more to come’ to myself. So, I must focus on not only what the game is now, but also what it could be in the future. With that in mind I press forward to make my first arms deal. 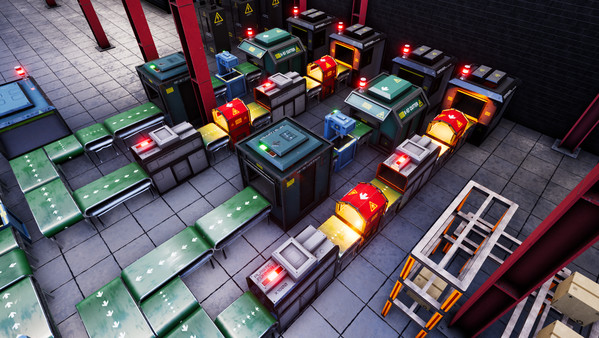 I don’t like comparing games to other games, but I felt echoes of titles while playing Gunsmith. It has the logistics of Factorio, the staff morale of Theme Hospital and the production lines of Big Pharma. You start off with some pre-purchased base materials which need to be modified in various ways to create a final product. Need gloves? Gotta heat up some plastic into fixtures, cut some fabric into hand shapes and merge the two through a mysterious merging device. While the true nature of creating items like this is more complicated there is a consistent logic to it all. For example, bullet casing needs to be heated first and then cooled to harden the metal, which is basically true! To add extra complexity each element needs to be monitored by a logistics employee, which forces you to deal with staff moral in a relatively automated world. Your final product needs to be boxed and then it’s stacked until your production line literally overflows. That is one aspect of Gunsmith I genuinely liked, each element of production had its own basic physics engine. This means you cannot just jam excess material into a single conveyor belt, you need to plan accordingly otherwise the items would factually fall off the line. Putting them back on is rightfully annoying, so your incentive for doing things right is your own mental preservation! 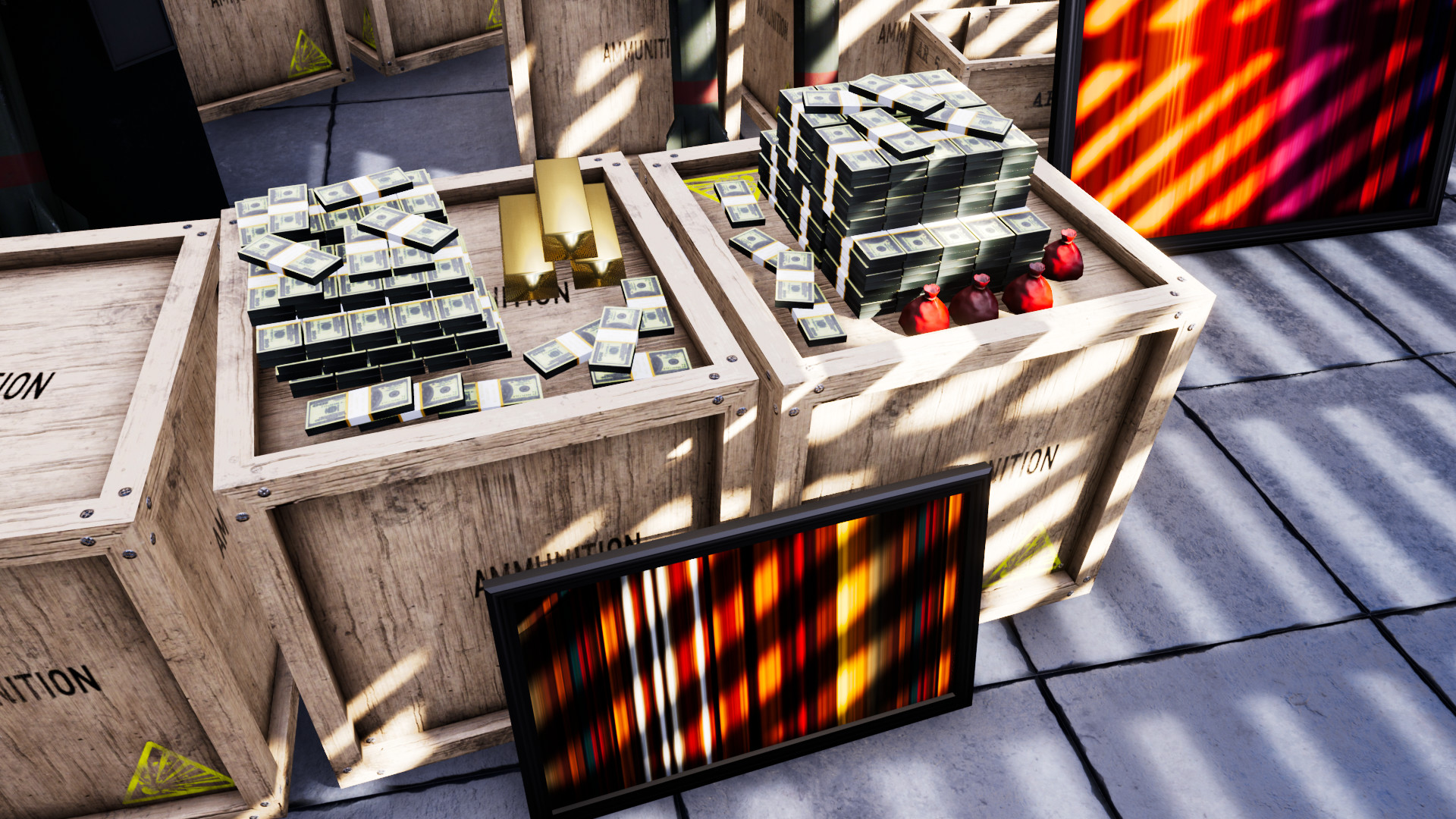 Once you’ve made Weapon X you need to sell it. Again this game takes a little twist as you don’t merely throw the items to the void and hope someone buys it. No no, you are in the arms business. People request Weapon X and you supply them, no questions asked! It could be from stocks you’ve kept to one side or a sudden rush to create the right machinery to make a profit, it really doesn’t matter, as long as the debt is paid. The ultimate goal of this game to sell weapons as efficiently as possible. The overall goal isn’t exactly to “get rich” but instead a mixture of reputation gains, accumulating wealth and perhaps your own perverse organisational needs. Truthfully the main end game goal is decided when you start the scenario and becomes the only true driving force for you to continue. Granted it is theoretically possible to sell an excessive amount of the most basic items… But what’s the fun in that?! We’re here to make war easier… for a price.

To actually make more than the bare bones you have a recognisably unfinished research tree. At present you can improve your general factory functions, make storage easier, access greater utilities stocks and eventually start to make complex weaponry. It stops short of semi-automatics and their associated ammo but there is clear vision to go further. How far that scope goes really depends on the developers right now. It could stop at rifles or stretch all the way to WMDs, the limit only appears to be how many people you want to kill. On that note… There is a counter on the game which acknowledges the indirect kill count courtesy of your entrepreneurial spirit. I suspect it will play a large role in the future but right now it’s just a stark reminder why Tony Stark walked away after making the Iron Man suit. 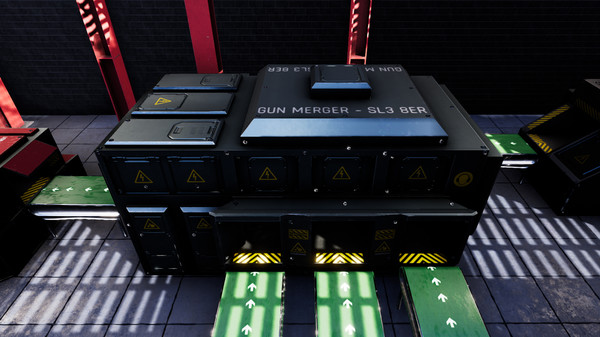 When thinking about the aesthetics of the game, I was really surprised. Utilizing the Unreal Engine Gunsmith is able to make even the simplest boot look… Well like a boot! It’s not just coloured boxes or indeterminate machinery, everything looks like it is meant to slot into place. In fact when I first got onto 9mm bullets it was the machinery’s entry points that guided my understanding of the production rather than the handy “cookbook” provided by the game. Hell, you can even see movies playing on the staff TV! It’s the little touches y’know? Strangely my ears were also pleasantly surprised, when playing very early Alpha games the quality of soundtrack is usually pretty low as the developers usually haven’t hired a worthy composer into late Alpha. Nope, seems Seacorp Technologies took the initiative in some way as I actually like the background music and ambient noise. It was not a composer’s wet dream or anything, but it complements the gameplay style elegantly.

I’m about to go onto things I didn’t like and/or I hope to see change in the future. A polite reminder this is pre-Alpha and whatever I write is a mixture of suggestions and potentially already implemented ideas (An update loaded after my stream! UGH! Bad timing!!). 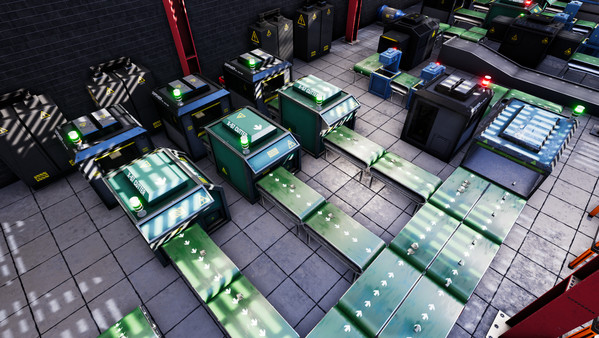 My biggest problem with the game was pace. Once I had a relatively reliable setup going, with enough orders to ensure a slow but steady profit, I was eager to move from armour manufacturing to cold-blooded weapons. I thought this would be relatively simple, maybe some rudimentary bullet system would be available after some minor research, I was VERY wrong. It took about 15 game days from when I wanted to make bullets to when I actually could, this bottleneck was entirely down to research. You can’t speed research up either, it simply takes a set amount of time. Furthermore each step in the manufacturing process had to be researched and they took 1 to 2 days. Include in a need to research greater utilities and logistical support and it was a slow march into a new empire. I was rather excited once I DID get my basic munitions system running but it took a while, if I wasn’t so driven to make a bullet to raise up my indirect kill count I don’t think I’d of had the will. Granted this could have been avoided with a little planning but being new to the game I didn’t know WHAT to plan. It might be different as the game develops, likely when the research becomes more vast, but right now I need a boot to be kicked up someone.

The other point I’d want to raise is a need for landmarks. As I said earlier my sadistic need to indirectly kill people was my driving force, but there should have been landmarks. Likely this will come into play in the proposed campaign system mentioned on the Steam website, but consider this a reinforced recommendation. Nothing but ambition forced me to escalate my production line. I need mini-goals, they guide me towards something bigger and give me a false sense of achievement. That sounds like a bad thing but… Well we’re gamers, all the achievements are ultimately false! Let’s not go too far down the rabbit hole here… Just give me sign posts.

Truth be told, I don’t expect what I have written above to be unexpected or even unlikely to be fixed in the near future. The game has been on Steam for around 6 months and since it’s still pre-Alpha the holes in the game are not just acknowledged, they’re expected. So the question I have to ask is, should you buy it now? Yes, you should. 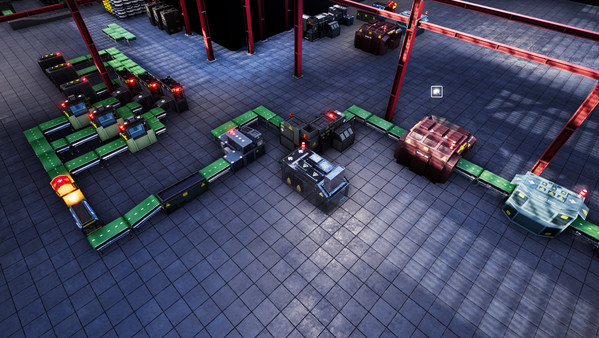 It’s an exceptionally good foundation of an epic game in the making. At present you would get the title for a good price, help a developer move forward in their career(s) and be a part of a growing concept. In the meantime, you are free to push yourself to greater height of financial megalomania while laughing at the indirect kill count. I know I keep coming back to it but…. It’s really rather fun! WHOOPS! Killed a few thousand with my shipment of Sub Machine Guns…. Thank your Gods I don’t have any REAL power.