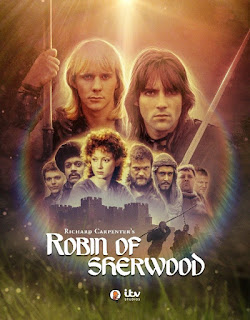 Nothing is ever forgotten as Michael Praed and Jason Connery return as Robin of Sherwood, alongside most of the original TV series cast, in an all new audio box set from Spiteful Puppet. Listen to the trailer...

Award-winning production company, Spiteful Puppet, have once again joined with independent Producer/Director (and occasional The DreamCage contributor!) Barnaby Eaton-Jones and ITV Studios, to deliver a brand-new box-set of audio adventures for fans of the iconic 1980’s show: Richard Carpenter’s Robin of Sherwood.

The set of four audio adventures brings back Michael Praed as the original Robin Hood, alongside the majority of the original cast. Jason Connery also returns as Robin Hood in a very special two-part adventure which imagines what would have happened at the start of Series Four (had the series not been cancelled at the last minute on television, due to funding issues). Also returning to reprise their original television roles are Clive Mantle as Little John, Judi Trott as Lady Marion, Mark Ryan as Nasir, Phil Rose as Friar Tuck, Peter Llewellyn Williams as Much, Claire Toeman as Meg of Wickham and Nickolas Grace as the Sheriff of Nottingham.

Of those original cast members who couldn't be included, the late Robert Addie, as Sir Guy of Gisburne, is replaced with Freddie Fox (reprising his role as Gisburne in the crowd-funded the feature-length The Knights of the Apocalypse, which began the journey of new Robin of Sherwood on audio), the late John Abineri as Herne is voiced by his sound-a-like son, Daniel Abineri, and Ray Winstone as Will Scarlet is absent (due to scheduling conflicts) temporarily replaced by the amazing Jon Culshaw doing a pitch perfect vocal impersonation. Culshaw said of taking on the role, "To take on the role of Will Scarlett was a real privilege. It was great to be guided by and keep true to the superb way Ray Winstone created the character - visceral, medieval, moral and steadfast."

Guest stars for these stories range from Adam Morris, playing a very evil version of the outlaw (who also played Robin Hood in Sir Tony Robinson’s classic BBC comedy Maid Marian and her Merry Men, where he was credited as Wayne Morris), to Carla Mendonca’s nasty Witch Hunter (CITV’s My Parents Are Aliens, CBBC’s So Awkward and recently playing a female re-working of Jekyll & Hyde called Henrietta & Eleanor for Audible).

As ever, the Sheriff of Nottingham, aka Nickolas Grace, had to have the last word, proclaiming, "The Sheriff of Nottingham is particularly thrilled that you supporters are still gathered in faithful clusters around the country, and are awaiting his return! After 35 years, he’s flattered that so many of you still believe in his virtue and talent to rule Nottingham-shire, and ultimately the country!" He added that "The new episodes may not contain any juicy water-closet or back-brushing bath scenes, but there is plenty of Sheriff mischief, naughtiness and decadence to satisfy you followers for at least another year!

"Continue to support your local Sheriff!”

Which, of course, we will. Ahem.

Available now, the ‘Audio Adventures’ is on general release as a physical box-set of four CDs in DVD-style packaging and also as individual digital downloads of each story. These are available from the Spiteful Puppet website www.spitefulpuppet.com (with other audio adventures for your listening pleasure as well).

You can listen to the trailer for the box-set here:

The box-set contains four new audio adventures, all of which are detailed below…

Wickham is not a happy village and, when Meg is threatened by Gisburne’s soldiers, Will Scarlet loses his temper and Wickham fears reprisals. The once loyal villagers, without Edward of Wickham to guide them, begin to turn on the outlaws who regularly save their lives.

Fortunately, another Hooded Man has entered the forest – with his own good lady and band of men. Is he the saviour or the charlatan of Sherwood?

(Set during Series One)

Whilst Robin is troubled by hazy visions of his father, Little John faces the wrath of a witch hunter who is about to make him pay for crimes he committed whilst under the influence of Baron de Belleme.

In order to save Little John, the rest of the outlaws play their part in uncovering the secrets that brought the witch hunter to Sherwood in the first place…

(Set after Series Three, as the start of Series 4 – before ‘The Knights of the Apocalypse’)

The Merry Men are without a proper leader, as Robin – after losing Marion to Holy Orders – spends his waking hours in an increasingly drunken state.

Abbot Hugo has cleaned out the family coffers and secured a release for his brother, the Sheriff, from King John’s prisons. This is granted on one condition – the Sheriff pays a fine for every month that goes by without the capture of Robin Hood.

Marion is harbouring a secret which may lead to the capture of Robin, which she isn’t aware the Sheriff knows about as he plots his revenge on the outlaws.

The village of Papplewick has a new head family keen to exchange goodwill with the outlaws. Much is less than thrilled when Robin decides he should be the one to meet with the head villager’s eldest child each month, to swap tax money for food and information.

The last thing Much wants is to trudge across Sherwood in all weathers to talk to a girl.