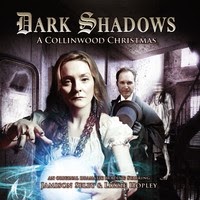 Bah Humbug specialist Susan Omand gets into the festive spirit cupboard again with a reminder of her thoughts on a Dark Shadows Christmas tale from Big Finish...

It’s Christmas Eve in Collinsport, and festive cheer is evident everywhere except the big house at Collinwood. Jamison Collins refuses to celebrate or to give his two children the fun and joy of the festive season. Instead they sleep upstairs in the cold dark house as their father dreams fitfully at his desk. It’s another nightmare of his dead wife Catherine and Jamison Collins wakes screaming.

Elsewhere on the estate, the gypsy Ivanka Romano, abandoned by her gypsy clan and now alone in the Old House, answers the door to find Steadman, the Collins’ butler. He informs her he has resigned and that the fate of the two children now rests with her. Ivanka gazes into her crystal ball and sees Collinwood as a dead and empty ruin. Shocked by her vision of the children’s future, she goes to the house and berates Jamison for leading an empty life and depriving his children. They venture deeper into Collinwood and find an abandoned ballroom covered with broken mirrors, where Jamison’s wife Catherine used to dance. Ivanka blows a cloud of herbs onto Jamison which causes him to remember his wife there, seven years ago when she was pregnant with their son, and Catherine had accidently cut herself on a shard of mirror, bleeding badly.

Ivanka and Jamison go back to his study containing and she uses some of the dust from the house to cause a vision of the past to appear in the fire, a happier time when Jamison was a boy, along with his uncle Quentin. She then causes a vision of the present to appear, this time of the pub in Collinsport in the present, showing how despised Jamison has become by the rest of the townsfolk. She blows another cloud of herbs onto Jamison; it reawakens another memory of Catherine. This time she is hysterical on her deathbed.

Ivanka attempts to create a vision of the future to show Jamison but instead hear a voice coming from another room. They follow it and find the ghost of Isaac Collins, the founder of Collinsport, mumbling to himself about the Scarlet Pearl and oblivious to their presence. Wondering what caused him to appear and realising she is out of her depth with the incantation, Ivanka decides to return to Old House to get more of her things. Jamison goes with her and they discover a glowing light coming from a portrait. Two spirits trapped within the portrait start to manifest as Ivanka and Jamison leave the house. Returning to Collinwood, Ivanka and Jamison find the place infested by ghosts of the past. Ivanka works out that her incomplete fire incantation from earlier caused them to appear but must work out why and how to reverse the process before the spirits totally take over...

Who doesn’t like a good ghost story? This is a typically Dark Shadows twist on the Dickens classic A Christmas Carol, with Ivanka being “the ghost of Jacob Marley” character who shows Jamison Collins’ “Scrooge” his Christmas past, present and future in Collinwood, and what a good twist it was. Having all the spirits associated with the house gather there made for a fantastic haunted house tale and the ending, although a bit schmaltzy, was the best twist of all because nothing ever goes right for the people of Collinwood, does it? As with a lot of the Dark Shadows episodes, it helps to know some of the characters and previous stories and their associations with Collinwood before listening to this one to get the most out of the nuances in it, but it still works very well as a standalone story. The acting and sound production was as ever top quality and I really enjoyed the convincing performance of Lizzie Hopley, who also wrote the episode, as Ivanka the gypsy.

This is definitely a story to knock the "bah humbug" out of the dark winter days and I think, like Dickens’ original ghostly tale, it is destined to become a festive tradition among the fans.