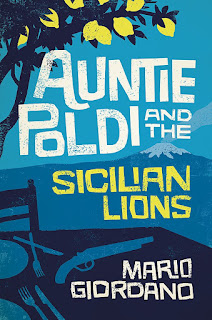 Auntie Poldi can think of no finer place to wait for death than Sicily. All she asks is a sea view, fine wine (and plenty of it), and her family close around.

When death instead takes her handsome young friend Valentino - and under mysterious circumstances at that - Poldi will not take it lying down.

Perhaps it's in her blood (her father was a detective chief inspector); perhaps it's a diverting excuse to spend more time with men in uniform; or perhaps it's just the promise she makes to Valentino while holding his poor dead hand.

But Auntie Poldi's hunting instincts have never felt more alive. Justice must be served - if it's the last thing she does . . .

In ten years’ time, I want to wear an orange trouser suit with a black wig, develop a brazen taste for dishy policemen and emigrate to Sicily to look at the ocean and drink myself to death. Ok, I don’t (orange really doesn’t suit me anyway, although the idea of constant prosecco and coffee with brandy in for breakfast does appeal) but that was the thought I had when I was only a few pages in to the first Auntie Poldi detective novel by Mario Giordano. I’d been given the book in a present from my buddy Paul who has been raving about it for months and I can certainly see why, the characterisation in the book is tremendous.

At 60, Auntie Poldi, or to give her her full title Isolde Oberreiter, came to Sicily from Bavaria at the insistence of her family after her husband Pepe died, because she was beset with dark moods and they wanted to re-instil some joie di vivre. Suitably ensconced in a small townhouse with a view of the ocean in front of her and the majesty of Etna as a backdrop, Poldi spends her days drinking copiously and taking surreptitious photographs of eligible looking policemen around town with whom she may want to have an affair. She shares the house occasionally with her nephew, a struggling author who visits to get “peace to work on his novel”, and it is he who narrates the story of the investigation into Valentino’s murder to us, second hand, as it is told to him by his aunt. This way of telling the tale seems a little odd to begin with but makes a lot of sense as the story gets more complicated because it allows for a slight retrospective distance from the events, that you don’t often get from a first person narration, while still getting Poldi’s personal opinion and thought processes on what’s been happening as she explains it to her nephew and, being a, shall we say, more mature lady, Poldi definitely has an opinion on everything. The other thing that seemed a little unusual to me about the way the book was written was that each chapter started with a summary, like the “coming up” bits that you get at the start of some TV shows these days, and I found it slightly disconcerting but it did indeed prove to be useful when, at one point, my bookmark parted company with my book and I lost my place, because it made it an awful lot easier to find where I got up to!

And, let me tell you, that bookmark was absolutely necessary because I found myself carrying the book around with me a lot, snatching minutes here and there to read a few pages rather than leaving it for any length of time, because I was hooked. The best way to describe the story itself is if you imagine a Mafiosi version of Murder She Wrote but with extra attitude and alcohol. There are twists and turns in all the right places, superb characters, stunning locations and quite a lot of adventure and excitement as she investigates the murder of her friend, but there’s nothing too scary or horrific, instead it’s a light, fun read – “cosy” detective fiction I think they call it. But the main reason that I want to start and read the book again immediately, and to hunt out the next book in the series which just came out in June (the third book is due in March next year) is for Poldi herself. Bold, forthright, opinionated, intelligent, curious and cultured, and with a great taste in breakfast drinking, she is indeed an inspiration.